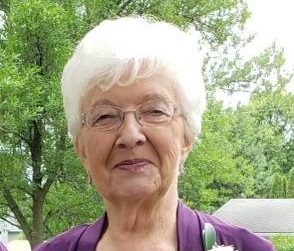 LaVonne Boyum, age 83, of Hector, MN died Monday, August 16, 2021 peacefully surrounded by her family at home. Funeral Services will be Thursday, August 19, 2021 at 11:00 a.m. at Christ the King Lutheran Church in Hutchinson with Pastor Mark Richardson officiating. Visitation will be from 9 to 11 a.m. on Thursday at the church prior to the service. Burial is at 2:15 p.m. at the Central Lutheran Cemetery in rural Franklin.  Arrangements by Dirks-Blem Funeral Service, Olivia, MN.

LaVonne Elda Boyum was born on June 10, 1938 in rural Fairfax, Minnesota to Harvey and Elvira (Hillman) Grams. She was baptized and confirmed at Emanuel Lutheran Church in rural Fairfax. LaVonne attended District 56 School for six years, then Emanuel Lutheran School for two years in Wellington Township. She went to Fairfax High School and graduated in 1956. After high school, LaVonne went to Beauty School in Mankato, MN. LaVonne was united in marriage to Delbert Ralph Boyum, also of Fairfax, on April 27, 1957 at Emanuel Lutheran Church in Wellington Township. Together they raised their four children. After marriage, LaVonne worked as a beautician in New Ulm, MN. Later, she worked in the B.F. Goodrich factory. They moved to Fairmont when Delbert started working for the MN DOT in 1961. They later moved to Cosmos, and in 1964 they moved to Hector. Delbert’s MN DOT supervisor job for the Marshall area had them moving to Marshall for 11 years. They then returned to Hector full-time when Delbert’s job took him to the Hutchinson area. LaVonne did daycare in her home for many children both in Hector and Marshall. They retired on July 7, 1997. In retirement, they have been the Campground Host and Hostess for Lake Carlos State Park near Alexandria. They spent their winter months in Parker, Arizona. LaVonne enjoyed fishing, camping, and traveling. She also had a passion for sewing.