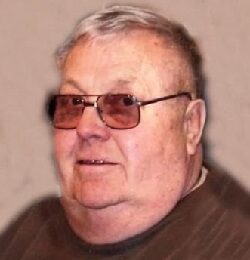 Laurence “Larry” Hoff Sr., age 84, of Bird Island, MN passed away April 11, 2022 at Regions Hospital in St. Paul, MN.  A celebration of Larry’s life will be Monday, April 18th, 2022 at 11:00 a.m. at Our Savior’s Lutheran Church in Bird Island with Pastor Dan Croonquist officiating. Visitation will be one hour prior to service. Military Honors will be by the Olivia and Bird Island American Legions and V.F.W. Burial will be in the Olivia Cemetery. Arrangements are by Dirks-Blem Funeral Service of Olivia.

A live stream of Larry’s service will be available on Monday at 11:00 a.m. at the following link: https://my.gather.app/remember/larry-hoff

Laurence “Larry” Wayne Hoff Sr. was born on July 8, 1937 in Olivia, MN to Sandy and Mildred (Gatzmeyer) Hoff.  He attended area country schools (where he says he walked up hill both ways).  Larry enlisted in the US military on December 12, 1955 and proudly served his country in the Korean War. Larry was united in marriage to Sandra Minkel on November 20, 1971 in Renville, MN.  Larry and Sandy were blessed with 3 boys, Laurence “Wayne” Hoff Jr., Jamie Hoff, and Jeremy “Jonny” Hoff. Larry worked for Dick Schneider Tiling for many years, worked on several area farms and was employed for 22 years at Southern MN Beet Sugar Cooperative in Renville. He continued working for SMBSC in his retirement at the Bird Island piling site.

Larry enjoyed all time spent with family; including many camping trips with Sandy and the boys in the blue bus, fishing on the pontoon, frequently visiting many local race tracks and attending numerous athletic functions with the boys.  Larry’s grandchildren always brought a special smile to his face.  Larry and Sandy shared many wonderful memories and always loved joking around with their sarcastic sense of humor.  Larry never wanted Sandy to be away from his side, always checking to see where she was and when she would be returning home.

Larry is survived by Sandy, his beloved wife of 50 years and their sons: Wayne (Carrie) Hoff, Jamie (Kim) Hoff and Jonny Hoff; two daughters Dagmar and Dana (from a previous marriage); his grandkids: Paige and Jenna Hoff, Myla and Maverick Hoff; sister, Sandra Doering; brother Robert “Bob” (Cheryl) Hoff; and sister-in-law, Barb Johnson; as well as many nieces, nephews and other relatives and friends. Larry was preceded in death by his grandson, Isaac Hoff; his parents and grandparents; his mother and father-in-law, Alfred and Darlene Minkel; his siblings and in-laws: Roger and Eleanor Hoff, Donald and Darlene Hoff, Jean and Gordon Menk, Veronica and Orlando Menk, Helen Hoff, Myron Doering, Pat Hoff and Algene Johnson; and nephew, Jerrit Johnson.