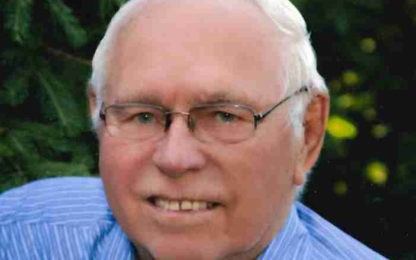 Services will be held at the Grace Evangelical Lutheran Church, Sleepy Eye on Friday, August 13, 2021 at 10:30 am.

The clergy will be Pastor Nathanael Mayhew. Interment will be at the Home Cemetery in Sleepy Eye.

Military rites will be provided by the Sleepy Eye Honor Guard.

Larry was born on August 14, 1936, in Sleepy Eye, MN to Clarence and Pearl (Sucker) Fischer. While attending Sleepy Eye Public High School, he met his best friend and love of his live, Marlene Schultz. Larry graduated in 1954 and Marlene did a year later. They were married on August 22, 1955. Larry was drafted into the army and served from 1959 until 1961. During his service, he was deployed to Munich, Germany where he and Marlene lived for over a year. When Larry’s service was complete, they moved back home to their farm in Albin Township. Larry was an active member of his community. He served many years as a board member of the Farmers Coop of Hanska and on the Church Council at Grace Lutheran Church. Larry retired from farming in 1998. He watched with pride as 5 of his sons continued his farming legacy. He loved them all dearly but he spent most of his retirement supervising from his Ranger or tracking down tools that mysteriously “walked away”. Larry’s greatest joy in life was living and working on the farm with his family. His children and grandchildren were always welcome for a visit or a card game. Larry always had a smile on his face and a joke to share. We will miss him dearly for he loved us all so.