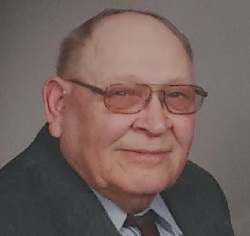 The clergy will be Pastor Harvey Pedersen. Interment will be at the Lamberton Cemetery.

Larry Melvin Lange was born on September 1, 1937, to Earl and Dollie (Willmes) Lange at the Windom Hospital. He was baptized and confirmed at Christ Lutheran Church in Jeffers. He attended Jeffers Public School and Lamberton High School. Larry was united in marriage to Jean Willhite on December 14, 1958, at St. Matthew’s Lutheran Church, Waterbury Township. During their 62 year marriage, they made their home in Lamberton where they raised their 3 children – Kevin, Darla, and David.
Larry worked at Bellig and Johnson in Lamberton as a farm equipment mechanic and later became part owner and head mechanic of W&M Co. in Lamberton. In 1980, he purchased the Varpness building and opened his own business, Larry’s Farm Service. After 37 years of repairing all types of farm equipment – primarily International Harvester, he focused his attention and passion on refurbishing Farmall Tractors. He retired and sold his building in 2017 due to health complications. This did not stop him from repairing smaller equipment for friends and family. He finally sold most his shop equipment and tools in 2020 and remaining parts, tools, his 6 Farmall Tractors and IH memorabilia in 2021 when his health worsened, and he sold the Red Iron Antiques building on Main Street in Lamberton.
He was a dedicate fireman for the Lamberton Fire Department. He was fire chief for 7 years and retired in 1993 after 22 years of service. He also was secretary of the Relief Association.
Larry enjoyed traveling and camping with his family; being able to see all states west of the Mississippi on trips to see relatives. Later they had several seasonal campers in north central Minnesota where he shared his passion for fishing with his sons Kevin and David and daughter Darla and her family. Larry and Kevin spent many quality hours on Lake Amelia fishing for Northers. His grandsons Tyler and Ryan enjoyed spending time on the water with their grandpa fishing also. He loved it when they outfished him. Camping wasn’t just about the fishing for Larry; grilling and campfires every night were a must. On special occasions a hollow log was used to make a fire chimney. Many friends and memories were made at the lake.
At home Larry enjoyed watching birds, especially wrens and hummingbirds, at the feeders and bird houses in their backyard as well as Jean’s flower gardens. His favorite flower to grow was a cock’s comb given to him by a dear friend.
On Wednesday, October 6, 2021, our Lord called Larry to his heavenly home at Valley View Manor in Lamberton, at the age of 84.
He leaves to mourn his passing, his wife Jean; children Kevin of Willmar, Darla (Roger) Hemiller of Jeffers, and David of Willmar; grandsons – Tyler (Fiancée Jessica Illg) Hemiller of Springfield and Ryan (Katelyn) Hemiller of Brookings, SD. Larry was preceded in death by his parents – Earl and Dollie Lange and brothers – John and Merle Lange.