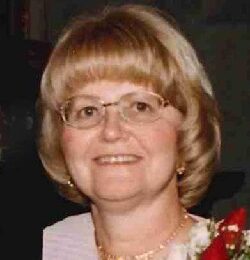 LaDonna Mae (Finstad) Ericksen age 71, of Nevis, MN formerly of Comfrey died on November 15, 2021, at her home in Nevis.

The clergy will be Rev. Robert Springer.

Interment will be at the Albion Lutheran Cemetery rural St. James in St. James.

LaDonna Mae Ericksen, of Nevis and formerly of Comfrey, passed away peacefully at her home surrounded by family on November 15th, 2021. LaDonna was born in Comfrey, MN on August 16th, 1950 to Oren & Mae Finstad. She graduated from Comfrey High School in the spring of 1968 and in July of 1968 was on a plane to fly to the Philippines to marry her high school sweetheart, Gerald Ericksen, who was in the Air Force stationed in Southeast Asia. Eventually they returned to the Comfrey area where they made their home on the Finstad home farm. In October 1972 they were blessed with their son, Jason. They had many happy years raising their son, farming, riding horses, and even line dancing. Donna enjoyed sewing, baking hours in the garden with her flowers, and spending time at Church in fellowship, especially at Albion Lutheran Church where she and Gerald were members. She enjoyed spending time with their numerous pets through the years, of which she could still fondly recall all their names and temperaments. Jerry & LaDonna rebuilt their house after it was destroyed in the March 1998 Comfrey tornado. They always enjoyed northern Minnesota, and in 2003 they bought a cabin in Akeley, MN. This became a special gathering place where many family memories – especially with their granddaughter Emily – were made. It was always her wish to move up north, which they were able to do this fall. Ladonna was a caring and calming person. She was a devout Christian and faithful servant of God. She was always there for family. Aunty Donty, as she was called by many of her nieces and nephews, was always up for an adventure, especially if they could have an ice cream cone at the end of the day. They may have gotten lost along the way, or floated down the river too far, but they always got there with many laughs. For those that loved her, the world will be a little less interesting of a place.
Ladonna is survived by her husband, Gerald, son Jason (Patricia) and granddaughter Emily, Sleepy Eye. Brother Ron (Caroline) Finstad, St. James, Sister Maxine (Alfred) Muller, Akeley, Mother-in-law Ladonna Ericksen, Sister-in-laws Janet Hansen and Laurie Haugen, as well as many nieces & nephews. She was preceded in death by her parents, father-in-law Ike Ericksen and sister-in-law Diana Pidde.