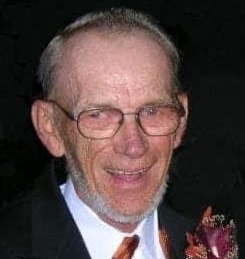 Service will be held at the Highwater Lutheran Church on Thursday at 11:00 am.

The clergy will be Pastor Michael Stangeland. Interment will be at the Highwater Lutheran Cemetery.

Arrangements are with the Sturm Funeral Home in Lamberton, MN.  Online condolences may be left for the family at www.sturmfh.com.

Kenneth Arndtson was born in Hendricks Mn, on February 19, 1946, to Ove Sr. and Josie (Kragtorp) Arndtson.  He was raised in rural Lamberton and graduated Lamberton School in 1964.  After high school Ken farmed with his father and mother.  He married Marilyn Knakmuhs and the couple raised 4 children.   Ken did field work for local farmers, worked as a mechanic, and worked many years at the local Westside Massey Fergus Implement Dealer in Lamberton.  Ken also ran his own tire shop, helped his brother build the bowling alley in Hastings, drove bus for Lamberton School, drove truck for Stavnes Farms and later owned a semi and trailer and trucked as “Ten Acres Express”.  Ken had many skills, he was “the jack of all trades but a master of none”.  When something needed to be worked on it was started but may take a while to finish.  Ken shared a portion of his life with Linda Clarken and raised 2 more children.

Ken was a Firearm safety instructor and used that passion for the love of hunting.    In the fall his place was known for the gathering of the hunt, you would see many trucks and a lot of orange for the hunt.  Ken was also a JC Member in Lamberton and played softball in the earlier years. He was involved in 4H when he was a youth and later with his children.  He headed up the youth leader for shooting sports, raised cattle for show, chickens, ducks, and other projects for 4-H Highwater Lads  Lassies.  Ken was an avid Twins and Vikings Fan.  The World Series was a must to watch.  Ken enjoyed reading old western books and loved to listen to old time music, Elvis was one of his favorites.

He is survived by his son Kenny Arndtson Jr. of Jeffers and his children – Steven (Cassidy) Moore and their children Maci, Connor, and Olivia; Scott Arndtson (friend Elisha) and children Warren, Hannah, Jessi, Masen, and Case; Kandace (friend Tyler) Arndtson and children Dominic, Brooklyn, and Maddie; Dylan Knutson and Isabella Ellis.  Daughter Shelby Arndtson of Jeffers (fiancé Mark Hengetgen) and her children Dawn (Derek) Krebs and their children Aiden, Aubrey, and Allie; Deven Roiger; and DeAnn Roiger.  Daughter Lisa Rohlik of Vesta and children Kristine (Brian) Davis and children Calen and Hannah; and Courtney (David) Roiger.  Daughter Shannon (Mike) Landkammer of Sleepy Eye and children Cody, Parker, and Molly.  Daughter Sara (Shawn) Torkelson of Tracy and children Lauren and Chelsey.  Daughter-in-law Amy Furth and daughter Alexia Furth.  Ken is also survived by his brother Merle and Eloise Arndtson of Hastings and Jay and Marilyn Arndtson of Bothell, WA and many nieces and nephews.  Ken was preceeded in death by his parents Ove and Josie Arndtson, brother