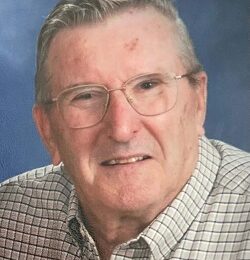 Service will be held at the Our Savior’s Lutheran Church on Friday at 2:00 pm.

The clergy will be Todd Mathison. Interment will be at the Lamberton Cemetery.

Kenneth A. Vollmer was born on September 3, 1932, to Albert and Edna (Gode) Vollmer in Tracy. He was raised on the family farm and attended Lamberton Public Schools and graduated in 1951. In 1955, Ken was drafted into the US Army and served as an ambulance driver until he was honorably discharged in 1957. On April 30, 1960, Ken was united in marriage to Mary Jo Vinar at St. John Lutheran Church in Redwood Falls. The couple farmed Ken’s family farm until they moved into Lamberton in 1994. He also worked for Blue Chip Feeds for 15 years and part time at Meadowland Co-Op. Ken and Mary Jo moved to New Ulm in February 2021. Ken served on the Farmer’s Elevator and Farmer’s Livestock boards and township board. He was a member of Our Savior’s Lutheran Church where he served on the council and a member of the Lamberton Area Historical Society and helped restore the blacksmith shop. He enjoyed restoring Jeeps, welding, being outdoors, wood carving, mechanical work and could often be found tinkering in the shop. Ken loved time with his grandchildren taking them on road trips to see fireworks and threshing bees. His family have happy memories of him and his Jeeps.
He is survived by wife Mary Jo Vollmer of New Ulm; children – David (Sharon) Vollmer, Michael (Kris) Vollmer, and Steven Vollmer (Karis Jacobson) all of Lamberton, Alan (Nicole) Vollmer of Murray, UT, and Christina (Randy) Schwab of Gibbon; grandchildren – Courtney (Justin) Thram, Travis (Corrie) Vollmer, Jordan (Debbie) Vollmer, Taylor (Kristen) Vollmer, Dylan Vollmer, Carson Vollmer, Karli Schwab, Thayne Schwab; 3 step grandchildren – Erin, Jeffrey, and Michael; 7 great grandchildren and 3 step great grandchildren; brother Donald (Mary Ellen) Vollmer of Superior, WI; and sister Carol Rasmussen of Batavia, IL. Ken was preceded in death by his parents and brother Robert Vollmer.