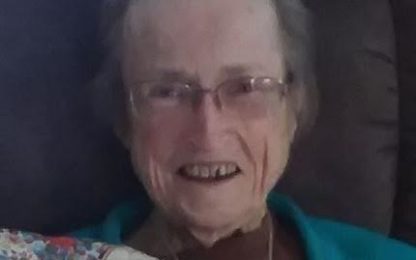 Judith “Judy” (Turbes) Goblish was born on October 8, 1939, to John and Mathilda (Hornick) Turbes in Springfield, MN.  She was baptized at St. Raphael‘s Catholic Church and attended first grade at St. Raphael’s School.  The family then moved to a farm near Wabasso where Judy attended St. Anne’s Catholic School and graduated as Valedictorian in 1957.

July worked at Woolworths in Redwood Falls until she married Donald Goblish Sr. on August 20, 1960, at St. Anne’s Catholic Church.  She then concentrated on raising her family and helping with the farm.  This included milking cows, taking care of the sows, cleaning pens and later helping with the field work including digging, running the combine, chopping stalks and plowing.  Judy also had other jobs throughout her life.  She worked for two accountants; George McWilliams and Nester and Nester for 26 years during tax season, and provided tax service out of her home.  She worked for Rural Community Insurance Company doing adjusting and customer service for 16 years, retiring in 2012 to care for her ailing husband.

Judy loved to cook and always had a big garden.  She preserved many foods to feed the family later.  She loved her family with all her heart.  Just as she loved the grandchildren and, later, her great-grandchildren.  After retiring, she would go for coffee and breakfast with the ladies at the Vesta Café.  In her earlier years, she enjoyed crocheting and sewing.  She loved computers and playing computer games.. Judy was most likely one of the first to have a computer in the area.  She was a member of the CCW.  After Holy Name Catholic Church closed, she and Don transferred to Holy Redeemer Catholic Church in Marshall.

Judy passed away and joined God and her husband in heaven on Wednesday, August 18, 2021, at her home in Vesta, surrounded by her loving family.