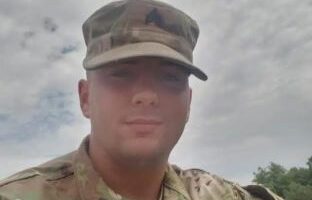 John Michael Booth, III, age 28, of Renville, died Sunday, December 25, 2022, at his home in Renville.  A memorial service will be held on Thursday, January 5, 2023, at 11:00 a.m. at Ebenezer Presbyterian Church north of Renville.  The Rev. Anna Williamson will officiate.  Visitation for John will be one hour prior to the services at the church.  Arrangements are with Dirks-Blem Funeral Service, Renville, MN.

John’s funeral service can be viewed on Wednesday on the Church’s Facebook page.

John Michael Booth, III was in Watertown, New York, on February 24, 1994, twin sons to Tonya Lee (Davis) and John Booth, Jr.  He and his family lived in a number of different areas including New York, North Carolina, and Texas.  He moved to Minnesota in 2010 and lived in the Morris area.  He later graduated from Morris High School in 2013.  He loved playing all sports, including football, basketball, and baseball.  He did everything with his twin and best friend Joshua.  John and Lacey Dworshak began dating in March of 2014, and they were later married on September 6, 2017, in Olivia, Minnesota.  They made their home in Renville and John was currently working for Waste Management in Redwood Falls, MN. He enjoyed building his Camaro and motorcycle, collecting and opening Pokémon packs with his girls, and doing scratch off cards.  He also enjoyed playing Xbox, taking his family fishing, wrestling with his girls, and surprising Lacey and the girls with date night at the movies.  Family movie nights were something he always loved.  He was a jokester and was always trying to make everyone laugh.  He had to eat Hot Cheetos and ice cream every night before bed.

John is survived by his wife Lacey, their two daughters, Kaylie and Kyra; his mother Tonya Booth of Morris, his father John Booth, Jr. of North Carolina; his siblings: Jonna (and Andrew) Kirwin of Morris, Christine (and special friend Brandon) Booth of New York, and Joshua (and special friend Norma) Booth of Willmar; his grandparents Donna and John Booth of New York, and several nieces, nephews and other relatives and friends.  He was preceded in death by his son John, IV; his great grandma “Bama” Eleanor Rivers, and his Nana Sandra Rivers