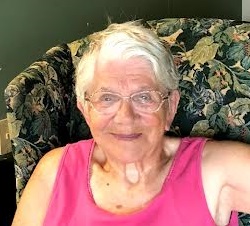 Joan M. Brown, age 91, of Morton, MN passed away peacefully on January 15, 2022 at the Cannon River Senior Living Memory Care Unit in Cannon Falls, MN.  The family wants to thank the employees of the Memory Care Unit at Cannon River for keeping mother active and engaged and for their compassionate care these last few years as her Alzheimers progressed.  We’d also like to thank the wonderful people of Morton who committed so many random acts of kindness helping our mother when she lived alone.

She leaves behind her daughter Becky (Bob) Shepard, and her sons, Patrick (Michelle) Brown, Jay (Debbie) Brown, Peter (Peggy) Brown and Tony (Jackie) Brown, 10 Grandchildren and 6 Great Grandchildren, her brother Bennett (Joan) Trochlil, her sister-in-law Lee Trochlil, and so many other family and friends that you can only imagine.  She is preceded in death by her parents, her husband Robert (Bob), her sister Sally Pietig, her brother Dennis Trochlil, her half-sisters Celia (Trochlil) Malecek,  Martha (Trochlil) Goblish, and her dog Duke.

Joan was born on August 24, 1930 to Lloyd and Marie (Svobodny) Trochlil in Olivia, MN before moving to Morton. She was a graduate of Morton High School. After graduating from good ole Morton High, Joan worked in the twin-cities for a short time. She would hitchhike home on Fridays and hitchhike back to the cities on Sundays or Mondays.  Joan and her husband Bob bought the Trees Night Club in 1952 and owned it until 1960. From the early 60’s to the early 70’s she published the Morton Reminder. In 1972 she started working for the Morton School as a secretary to the principal. While working at the school she became the mother all the kids could go to while at school. But you NEVER wanted to be caught out in the hallway without a pass. She continued working for the school until it closed in 1985 when they merged with the Redwood School District.  She started working for the Redwood School District until the 90’s when she retired.  But she never really retired.  She worked as a waitress at the Valley Supper Club.  If you ever ate there on a night she worked there was a good chance she spilled something on you.  Waitressing wasn’t a strong point for her but she loved the job and talking with all of her customers. When she was in her 80’s she helped with running the Morton Senior Center, which was something she truly loved.

Joan loved her plants and loved her birds.  She could sit out in her porch for hours and watch the birds.  Cardinals were her favorite.  Bird experts will say that Cardinals are territorial, but she would have 6 pairs hanging around her feeders in the winter time. She would also have a dozen hummingbirds feeding at her feeders and another dozen waiting to get in.

Her faith was very important to her. She was a devout member of St. John’s Catholic church in Morton and sang in their choir for many years.

A celebration of life will be held at a later date.