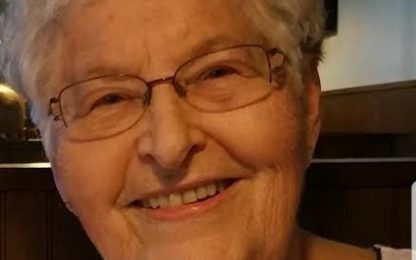 Joan Claire Miska (nee Danger) of Minnetonka (formerly of Redwood Falls) passed away on March 28, 2020.  A memorial service will be planned at a later time. Joan was born on April 16, 1930 to Jack and Jane Danger.  She had three brothers, John (Flo), Chuck (Donna) and Bob. They all worked at Danger’s Rexall Drug Store on Main Street, Hinckley MN. Joan attended college at Grinnell in Iowa and at the University of Minnesota, where she met her husband, Jim Miska.  They married in 1951 and lived in California, Colorado and South Dakota before settling back in Minnesota. By 1970, their family included 5 children: Jan (Tom) Keaveny, Bill (Michele), Mary (Greg) Liska, Rich (Deb) and Carol (Scott) Eliason. Grandma JoJo had 17 grandchildren and 8 great-grandchildren (with 2 more on the way!)

Joan will be remembered for her friendly smile and positive attitude!  She was a Girl Scout leader, a church pianist, a knitting instructor and a white-faced clown!  She was on the Redwood Falls School Board; she was the first female Redwood County Commissioner and she served on the Minnesota State Emergency Medical Services Regulatory Board. Grandma JoJo loved to read and sing and laugh and do crossword puzzles and Sudoku.  She welcomed many people into her heart and her home. She enjoyed vacationing with her family. She was fun to be around and easy to talk to. She especially enjoyed watching her grandchildren and great-grandchildren as they grew!

Joan lived to be nearly 90 years old! She was preceded in death by her husband, parents, 2 brothers and 1 grandson. Her faith was unshakable and, on her final evening, when asked what “goal” should be written on the hospital whiteboard, she replied, “Heaven!” Joan’s family would like to acknowledge the community she enjoyed at The Glenn in Minnetonka during the last decade of her life.  She met many new friends there, including her special friend Bob Thompson, and she appreciated the kind and caring staff. Memorials in honor of Joan Miska can be given to the Redwood Area Communities Foundation.