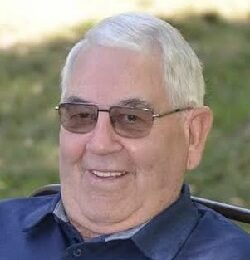 Jerome “Jerry” Charles Irlbeck, age 80 of Redwood Falls, formerly of Wanda area, passed away Wednesday, March 2, 2022 at Banner Baywood Medical Center in Mesa, AZ.  Mass of Christian Burial will be held at 11:00 a.m. Monday, April 4, 2022 at St. Catherine’s Catholic Church in Redwood Falls.  Visitation will be 4:00-7:00 p.m. Sunday, April 3, 2022 at the church with a prayer service at 7:00 p.m.  Visitation will continue one hour prior to the service at church on Monday.  Interment will be in the St. Mathias Catholic Cemetery in Wanda.  Online condolences may be sent at www.stephensfuneralservice.com. Stephens Funeral Service – Redwood Valley Funeral Home is assisting the family with arrangements.

Jerome “Jerry” Charles Irlbeck was born April 26, 1941 to Charles and Grace (Lohaus) Irlbeck at the family home in Willow Lake Township, Minnesota.  Jerry received the Holy Sacraments of baptism, first communion and confirmation at St. Mathias Catholic Church.  He attended grade school at St. Mathias and graduated from St. Anne’s High School in Wabasso.  After graduation, he farmed with his father.  Jerry met the love of his life, Susan Jacobus, and was united in marriage on August 22, 1964 at St. Joseph’s Catholic Church in Clements.  The couple moved to the family farm, where they raised their four sons.  Jerry was a lifelong farmer for 58 years.  He stayed active in farming during semi-retirement.  Jerry and Susan moved to Redwood Falls in 2012.  They were blessed to winter in Mesa, Arizona.  Jerry enjoyed 4-wheeling, golfing, and playing cards with the company of many friends.  He was a man of great faith.  Jerry cherished his time strengthening his relationship with the Lord with his prayer group.  He enjoyed gardening, especially growing watermelon.  Jerry loved to give his garden produce to family and friends.  He was the biggest fan of his three grandchildren.  He attended all of their school events, often with one ear phone to listen to KLGR broadcasting the game while watching in person.  Jerry’s pride for his grandchildren would shine through as he gave them each a big hug after every game and each time he would see them.  Best of all, he loved playing pranks and making his friends and family laugh. Jerry was a loving husband, father and grandfather.

Jerry is survived by his wife of 57 years, Susie; sons: Jeff (Heidi) of Sanborn, Jaime of Redwood Falls, Kent of Wanda, and Andy (friend Kari) of Eagan; grandchildren: Mitchell (friend Alaina) of Duluth, Leah and Tyson both of Sanborn; siblings: Eugene, Margaret (Jerry) Altermatt and Mary (George) Walter; sisters-in-law: Colette Irlbeck and Jane Irlbeck; brother and sister-in-law: Bob and Mary Jacobus; and many nephews, nieces and cousins.  He is preceded in death by his parents, parents-in-law Kermit & Helen Jacobus, brothers: Donald, Richard and LeRoy, sister Dorothy, and sister-in-law Diane Irlbeck.  Blessed be his memory.