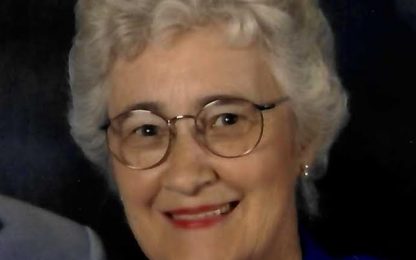 Jane Frances Rice, age 92, of Renville-Sacred Heart area passed away on Saturday, March 20, 2021, at Grace Point Crossing Commons in Cambridge, Minnesota.  A private family funeral services will be held on Friday, March 26, 2021, at St. John’s Lutheran Church in Renville.  The Rev. Michael Kuschel will officiate.  Burial will be in Fairview Cemetery in Renville.  Arrangements are with Dirks-Blem Funeral Service, Renville, MN.  Memorials can be sent to St. John’s Lutheran Church or the Renville Museum.

A live stream of the service will be available on Friday, March 26, 2021 at 11 a.m. by clicking on the following link.  https://my.gather.app/remember/jane-rice

Jane Frances Rice was born in Hayfield, Minnesota on August 10, 1928, to Serine and Wallace Myster.  Jane was baptized and confirmed at Trinity Lutheran Church in Hayfield, Minnesota.  She graduated from Hayfield High School and attended Business School in Mankato. She moved to the Bird Island area to live with relatives while she worked in the bank.  She married Kenneth Rice from Sacred Heart on March 26, 1949, and together they lived and farmed south of Renville.  In 1980, they moved onto the Rice Homestead in Sacred Heart Township and lived there until moving into Meadows in 2015.  After Kenneth passed, Jane moved to Gracepointe in Cambridge.

Jane was involved in the community and loved spending time with friends. Whether it was playing bridge with the same group of women every month for over 50 years, meeting with the Homemakers south of town, or working with other volunteers at the Renville Museum.  Jane was also involved with the Renville County Fair, St. John’s Lutheran Church and was a 90-year member of the American Legion Auxiliary, taking over her mother’s membership when Jane was two years old.  She and Ken spent many winters in Mesa, AZ as snowbirds where they met many life-long friends.

Jane loved cooking and collecting recipes.  She also spent many hours doing needlepoint, hardanger, and cross-stitch. She loved looking into her genealogy and put together many family reunions on both sides of her family. She loved her Norwegian heritage and passed that on to her children.  She and Ken made two trips to Norway to look up relatives on both sides of the family.  They stayed in touch with them for years.  Jane and Ken regularly made lefse and she loved to bake all the Scandinavian foods: Kringle, sandbakkles, fattigmann, and kransekake.

Jane and Ken also enjoyed spending time with their friends: playing cards at each other’s homes, meeting at the Palms Ballroom, and going on trips together.