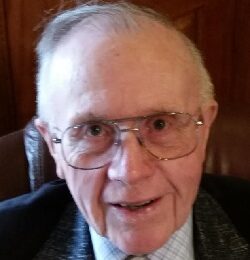 Service will be held at the Highwater Lutheran Church on Monday at 10:30 am.

The clergy will be Pastor Michael Stangeland. Interment will be at the Highwater Lutheran Cemetery

James Stuart Derickson was born on August 31, 1930 to Alvin and Myrtle (Mattison) Derickson in Highwater Township, Cottonwood County. On August 22, 1954, James was united in marriage to Ella Klingenberg at the United Methodist Church in Morgan. James’ passion and enjoyment was farming. His hobby was farming. His life was farming. James and Ella were members of the Storden Boots and Bows Square Dance Club and enjoyed traveling to Hawaii, Norway, and Australia. He was a member of Highwater Lutheran Church in rural Lamberton where he served on the church council. James served on the Highwater Township board for over 30 years, Lamberton Elevator board, and Southwest Regional Development Committee.