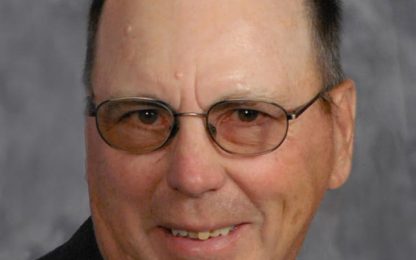 James S. Treml, age 76 of Wabasso, passed away peacefully Wednesday, March 11, 2020 surrounded by family at St. Cloud Hospital.  Mass of Christian Burial will be held at 10:30 a.m. Saturday, March 14 at St. Anne’s Catholic Church in Wabasso.  Visitation will be 4:00-7:00 p.m. Friday at St. Anne’s with a prayer service at 4:00 p.m. and a Rosary to follow.  Visitation will continue one hour prior to the service at church on Saturday.  Interment will be in the St. Anne’s Catholic Cemetery. In lieu of flowers, please donate to Redwood Falls Cancer Center Hospital, Farther Diehl Endowment or your choice of charity. Online condolences may be sent at www.stephensfuneralservice.com.  Stephens Funeral Service – Redwood Valley Funeral Home is assisting the family with arrangements.

James S. Treml was born May 24, 1943 to Michael and Agnes (Hillesheim) Treml in Sleepy Eye, Minnesota.  He was baptized and confirmed at the Church of Japanese Martyrs in Leavenworth.  Jim attended country school for four years near Leavenworth and graduated from Springfield High School in 1962.  Later, he enlisted and served in the U.S Army and was stationed in Germany for 18 months.  Jim served until his honorable discharge in 1966, when he began serving in the U.S. Army Reserves. He met the love of his life, Joanne Werner, at a dance hall in New Ulm.  On July 6, 1966, the couple was united in marriage at St. Anne’s Catholic Church in Wabasso.  Jim was a man of strong faith, he was a member at St. Anne’s, where he belonged to the Knights of Columbus and This Man is You groups.  He was also a member of the Wabasso American Legion.  Jim spent most of his life farming corn and soybeans.  He was a handyman and could fix almost anything, except computers.  Jim was always up for a challenge and was always there if anyone needed a helping hand.  He enjoyed brewing homemade beer and was known for his famous popcorn balls. Some of his hobbies included hunting, fishing, golfing and playing cards.  Jim had a great sense of humor and enjoyed being a jokester. He loved spending time with his family, especially his grandchildren.