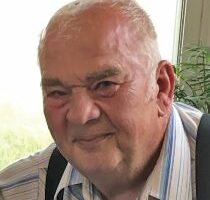 Jim graduated from Boyd High School and then completed a two-year course in architectural drafting before enlisting in the Navy, where he served briefly until receiving a medical discharge. He spent his career employed as a draftsman and purchasing agent.

In July 1969, Jim married Patricia (Pat) Wallace in Watson, Minnesota, and together they moved to Redwood Falls, where they designed and built a home and lived for almost forty years before moving to Coon Rapids. He retired in 2015, celebrated with an Alaskan cruise, and looked forward to winter trips south with Pat.

He loved hunting, fishing, and woodworking. Over the years, he made beautiful heirloom furniture for his family and others. He was an avid card player, who was happy spending time in friendly rivalry and complaining about his cards. He loved the challenge of fixing things, and liked helping others with projects, particularly at church.

Jim embraced a grumpy-old-man persona, which was authentic, but was matched by a deep sentimental side. With his grand-dog, Olaf, he shared a love of naps and snitching cookies. In 2019, he became a grandfather, a role he treasured.

Jim is survived by his wife, Pat; two daughters, Robyn and Wendy; one granddaughter, Aaliyah; his brother, Daniel Weckwerth, and his wife Sandra; brother-in-law, Dale Wallace; five nieces and nephews; and his cousin and close friend Dennis Koepp and his wife, Sheila. He was preceded in death by his parents; his beloved son, Jay, lost at the age of six months; his parents-in-law, Roger and Gudrun Wallace; his brother-in-law Donald Wallace; his sister-in-law Sharon Wallace; and his nephew Steven Wallace.

A memorial service will be held at King of Glory Lutheran Church in Blaine on Friday, January 20, at 11 a.m., with visitation an hour before the service and a light lunch to follow. The service can be live-streamed and will be available as a recording at King of Glory’s Facebook page (facebook.com/kogblaine).