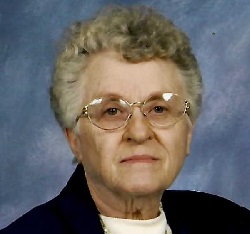 Irma Myrtle Rahn, age 97, of Renville, died Friday, September 24, 2021, at the RenVilla Nursing Home in Renville.  Funeral services will be held on Wednesday, September 29, 2021, at 11:00 a.m. at the Zion United Methodist Church in Danube.  The Rev. Durene Cornell will officiate.  Burial will be in Fairview Cemetery in Renville.  Visitation will be one hour prior to the services at the church in Danube.  Arrangements are with Dirks-Blem Funeral Services, Renville, Minnesota.

Irma Myrtle Rahn was born on January 31, 1924, in Grey Eagle, Minnesota to Arthur and Bertha (Robbins) Graber.  She grew up in Grey Eagle and attended school there.  She was united in marriage to Harold Rahn on November 21, 1949, in Litchfield, Minnesota.  They later moved to Renville and Irma worked at the Rosaasen Nursing Home in Renville, Control Data in Redwood Falls, and at the RenVilla Nursing Home.  Irma was a member of the Renville Alliance Church where she was the treasure and Sunday school teacher. After the closure of the church she became a member of the United Methodist Church where she was involved in UMW and donated many pies and baked goods. She was a faithful follower of the Lord Jesus Christ.   She loved growing and selling flowers from her greenhouse, baking pies for people, making dill pickles, and feeding the birds and keeping the feeders full was a must for her as they were an important part of her life.  She also loved spending time at the local farmers market selling her goods.

She is survived by her son and daughter: Arthur (and Dee) Karnes of Glenwood, MN, and Mellody Hanson (and Dave Aalderks) of Spicer; her step son, Dudley Rahn of Pollock Pines, CA; her former son-in-law Jim Hanson of Renville;  her grandchildren: Brenda (and Mike) Bergh of Spicer, Jeff (and Andrea) Karnes of Sunburg, Carey Hanson of Gardner, ND, Leif (and Shannon) Hanson of Sacred Heart, Jennifer (and Chris) Knight of Renville, and Molly (and Blake) Hermanson of Casselton, ND; her step grandchildren: Scott Rahn of Woodland, CA, and Julie (and Brian) Rahn-Farmer of Vallejo, CA; 15 great grandchildren and 13 great-great grandchildren,  her favorite cats Babe and Charlie, and many other relatives and friends.  She was preceded in death by her parents, her husband Harold, and her siblings: Pearl Messenger, Nellie Mokros, Lillian Salmi, and Jessie, Myles, John, and Giles Graber.