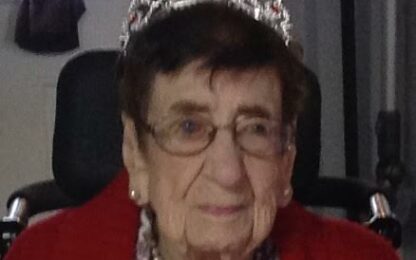 Hazel Eleanor Krause, age 104 of Belview, passed away Tuesday, November 2, 2021 at Heritage Pointe Senior Living in Marshall.  Private family services will be held.  Interment will be in the Grace Lutheran Cemetery in Belview. Online condolences may be sent at www.stephensfuneralservice.com. Stephens Funeral Service – Redwood Valley Funeral Home is assisting the family with arrangements.

Hazel Eleanor (Fossum) Krause was born October 26, 1917 to Gustav and Stena (Swanson) Fossum in Kintire Township north of Belview, Minnesota.  Later, the family moved south of town.  Hazel attended school in District 28E, where she could only speak Norwegian; it was hard to learn English.  She helped her dad with farming, plowing and cultivating with horses.  Hazel helped her mother with bread and pie making.  Another job she had was to keep the corn cobs filled to fire the stove for baking.  Hazel married Everett Krause on September 7, 1939.  The couple made their first home near Echo and then they later moved to a farm south of Belview.  They attended Evangelical Lutheran Church, which later was changed to Grace Lutheran Church in Belview.  Hazel was a Sunday school teacher and the treasurer of the Ladies Aid for several years.  During her married years she also helped her husband with farming.  They couple retired in 1988 and moved into Belview.