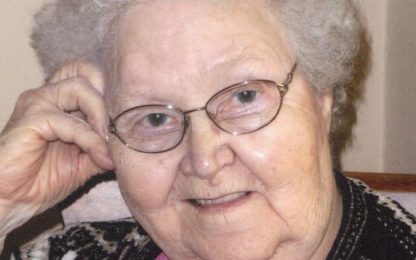 Harriet Johnson, age 91, of Becker, formerly Renville, died on Saturday, April 11, at Shepherd of Grace Senior Community. A private family interment will be held at Fairview Cemetery in Renville.  Arrangements are with Dirks-Blem Funeral Service of Renville. Memorials can be mailed to Delores Zaske at 39 White Oak Circle, Franklin, NC 28734.

Harriet Esther Johnson was born on February 8, 1929 to Herman and Margaret (Hinderks) Stomberg in Renville. Harriet married Clifford Johnson on July 11, 1946 at First Lutheran Church. Their marriage was blessed with six children. Together they made their home on a farm in Renville. There was no doubt that she had a green thumb and loved gardening. While living on the farm she had a three acre vegetable garden as well as many lilies, snapdragons, and cannas flowers. She was a life-long member of First Lutheran Church in Renville where she was active in the ladies aide group. Harriet was also a member of the VFW Ladies Auxiliary. She loved a strong cup of coffee every morning, if the spoon couldn’t stand up then it wasn’t strong enough. Embroidery and crocheting were hobbies that she really enjoyed. Harriet was an avid walker. The weather rarely kept her from walking to her various house cleaning jobs around town. Harriet moved to Becker in 2008 and resided there until she was called home to her savior.