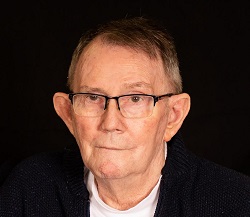 Harold Alan Drackley, age 79 of Tracy, passed away Tuesday, January 25, 2022 at Sylvan Court Nursing Home in Canby surrounded by family.  Funeral Services will be held at 10:30 a.m. Saturday, January 29, 2022 at Tracy Lutheran Church in Tracy.  Visitation will be one hour prior to the service at church on Saturday.  Interment will be in the Tracy City Cemetery. Online condolences may be sent at www.stephensfuneralservice.com.  Stephens Funeral Service – Tracy Area Funeral Home is assisting the family with arrangements.

Harold A. Drackley was born October 13, 1942 to Theodore and Alice (Case) Drackley in Tracy, Minnesota.  He was baptized and confirmed at the Tracy United Methodist Church.  Harold attended Tracy Schools and graduated in 1960.  He continued his education at the University of Minnesota for a short time and played his baritone in the marching band.  Harold worked at the Minneapolis Airport parking cars, before his marriage to Doris Stenberg on February 2, 1963 at Trinity Lutheran Church in Walnut Grove.  To this union three children were born, Todd, Angela and Natalie.  He had several jobs over the years.  Harold drove semi for Anderson Trucking and for Schwan’s.  He also worked in the parts department for Schwan’s.  Harold then ran the Sears catalog store in Tracy.  He worked for Marshall Truck and Trailer and Olson & Johnson selling truck parts.  He ended his career farming, which was his real joy.  Harold sang in the Methodist Church since high school and served as worship chairman for several years.  He was a member of the Minnesota State Soybean board representing Murray County.  He was also a member of Shades of the Past and played in the Tracy Community Band for 19 years.  To pass the time Harrold loved to golf and go bowling.  He created beautiful woodwork and left us many things to remember him by.  Harold loved to work on his ’56 Chevy and his ’71 Caprice Convertible.   He loved playing the card game 500 and he was a member of card clubs for over 50 years.  Harold enjoyed traveling and went on three cruises.  Harold suffered a massive stroke in January 2010 and was taken care of by his wife, until he entered Sylvan Court Nursing Home in Canby on June 7, 2021.