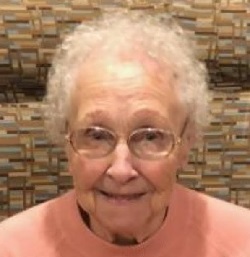 Memorial services for Guila Kurtz, age 97, of Echo will take place at 11:00 a.m. on Saturday, May 21, 2022, at Rock Valle Lutheran Church rural Echo. Visitation will be from 5 to 7 p.m. Friday, May 20, 2022, at Sunset Funeral Home in Echo and will continue one hour prior to the service on Saturday at the church. Private family interment will follow in the Echo City Cemetery.

Guila Mae Lavon (McLeod) Kurtz was born in Echo on April 27, 1924, to Neil and Elsie McLeod. She was one of seven children. She was confirmed at Peace Lutheran Church in Echo and attended K – 12 in Echo, graduating in 1942.

She helped her folks with the McLeod Café and was later employed at the Echo Creamery.  She married Amos Kurtz and had seven sons. Guila worked in the kitchen at the Echo School while raising and refereeing seven boys. Then she went into business with her mother taking over the Echo Clothing Store. After this business venture Guila started a new career working at Zytec in Redwood Falls, where she made many new friends. Retirement included the Legion Auxiliary, Hope Market, Senior dining, spending time with her family, watching her favorite game shows; she was an avid supporter of the E.C.H.O. Charter School and her favorite past time was playing scratch-offs while Sam her cat would sit in her lap.