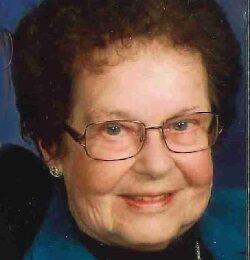 Public visitation will be on Wednesday, February 2, 2022 from 5:00 pm to 7:00 pm at the Sturm Funeral Home, Springfield Chapel those attending are asked to wear a mask.

Arrangements are with the Sturm Funeral Home in Springfield.

A private face book recording of the service will be available from the family after the service.

Fern F. Meine was born on February 11, 1932 to Alfred and Gertrude (Sorenson) Kirschstein on the family farm near Springfield. At the age of 7, her family moved into Springfield where she attended Springfield schools and graduated in 1950. Fern worked for Forester Furniture Store as the bookkeeper and clerk. On June 23, 1951, Fern was united in marriage to Walter Meine at the United Methodist Church in Springfield. The couple operated the Springfield Greenhouses until 1971. She then worked for Sward-Kemp Drug Store until her retirement in 1993. She enjoyed needlework, camping, gardening, playing cards, fishing, and traveling throughout the US. Fern was a member of the United Methodist Church where she was active in the memorial committee, Esther Circle, and bible study. Fern enjoyed visits from her family and spending time with her grandchildren and great grandchildren.
She is survived by her 4 sons – Douglas (Mary) Meine of Rochester, Tony (Lynn) Meine of Rochester, Ronald (Kayla) Meine of Clements, John (Marsha) Meine of Rogers; grandchildren -Laura Meine (John Wiedenhoeft), Joe (Candace Phalen) Meine, Lisa Meine, Roxy (Joe) Korkemeier, Renee Meine (Fiance Kris Morgan), Kyle Meine, Jennifer (Nick) Steffen; great grandchildren – Grady, Harper, Reed Korkemeier, Hadley Meine, and Charlotte & Leon Phalen-Meine; and niece Barb (Duane) Tomschin. Fern was preceded in death by her parents, husband Walter in 2016, sister Rose (Ken) Lee and granddaughter, Courtney Meine.