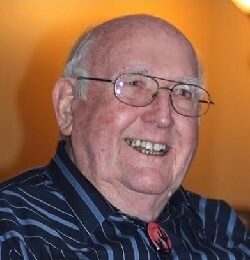 Service will be held at the St. Paul Lutheran Church on Tuesday at 10:30 am.

The clergy will be Pastor Tricia Mattson. Interment will be at the St. Paul Lutheran Cemetery in Springfield, MN.

Eugene Henry Gramentz was born November 13, 1928, to Henry and Gertrude (Dehne) Gramentz in Burnstown Township, Brown County, MN. He lived his early years with his grandparents on a farm adjacent to Boyes Lake by Cobden, as during the depression, many families would reside and work at one location to survive the tough times. He attended country school and later school in Springfield graduating after the eighth grade. Gene went on to work for a Springfield area farmer, then began farming with his father and uncle. He volunteered to enlist in the U.S. Navy and had his three-year tour extended due to the Korean War. Upon returning to Springfield, he and Donna Mae Dorothy Bloemke were married on September 24, 1952. Gene worked for Och’s Brickyard and drove a milk truck route for the Sleepy Eye Creamery, but never gave up his desire to farm. Gene and Donna rented farms over the next 11 years by Leavenworth, Sleepy Eye, and finally Cosmos. Gene and his family returned to Springfield to work for Tom Miesen painting for about 10 years and then went on to operate his own business, Gene’s Repair for the next 38 years. Gene’s hobbies were going up to the lake, staying in their camper and fishing, playing accordion, and dancing. He was a self-taught musician that used sheet music to sing the words to the song. The notes were all played by memory. He started the Half Notes band which toured southern Minnesota playing at establishments that wanted old-time polka and waltz music with a little country music mixed in on Saturday nights. In his later years he enjoyed performing for St. Paul Lutheran Church events, the residents of St. John Lutheran Home, and at family events. In the summer he would play out on his homes deck and draw a small crowd of music loving neighbors. He was generous with his musical talents. Gene was a member of the Springfield American Legion Post 257, VFW Post 7085, and St. Paul Lutheran Church.