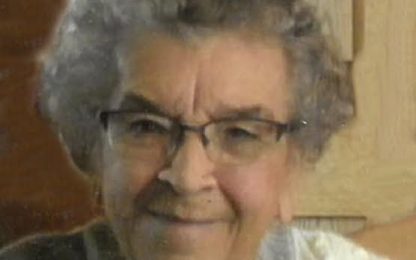 Arrangements are with Nelson-Hillestad Funeral Service of Morgan. E-mail condolences may be sent via www.nelson-hillestad.com.

Esther Margaret was born on November 14, 1924 to Fred and Josephine (Hillesheim) Mickelson in Leavenworth Township, Brown County. She attended and graduated from St. Mary’s Catholic High School in 1942. Esther married Lowell Greenberg on November 16, 1949 in St. Mary’s Catholic Church in Sleepy Eye. Esther and Lowell worked side by side on the farm first outside of Franklin and in 1966 they moved to Eden Township, rural Morgan, where she helped with running a successful farming operation. She and Lowell made a great team.

Esther was in her element when she worked in her beautiful gardens, walked the beans, mowed the lawn or any other outside labor and she never met a weed she liked. She was equally competent in the house as an amazing cook, a great preserver of fruits & vegetables and raised roosters to butcher. Esther also raised the chickens for the eggs to sell, raising money so she could buy the groceries for her family.