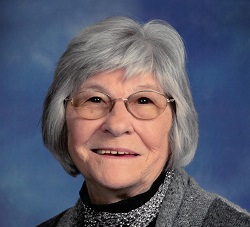 Elsie B. Riddell, age 92 of Westbrook, passed away Tuesday, April 12, 2022 at Sanford Westbrook Hospital.  Memorial Services will be held at a later date. Interment will be in the Westbrook Cemetery.  Online condolences may be sent at www.stephensfuneralservice.com.  Stephens Funeral Service – Westbrook Funeral Home is assisting the family with arrangements.

Elsie B. (Nimerfroh) Riddell was born February 6, 1930 to Louie and Millie (Legler) Nimerfroh on the family farm in Belfast Township, Murray County, Minnesota.  She was baptized and confirmed at the American Lutheran Church in Avoca.  Elsie attended Fulda Public School and graduated in 1947.   She was united in marriage to Darrell Metcalf and to this union two sons were born, Jim and Doug.  Together they lived in Windom for several years and later moved to Shakopee.  Elsie worked as a waitress and as an office manager at an account and bookkeeping firm.  She later moved to Storden and married Jack Riddell.  Elsie then moved to Westbrook, where she had resided ever since.  She worked at Fairland Management in Windom and later in the kitchen at Sanford Westbrook Hospital, until she was 85 years old.  Elsie was a member of the VFW Auxiliary and Grace Lutheran Church.  She enjoyed playing cards, gardening and yard work.  Elsie loved to visit and spend time with family and friends.

Elsie is survived by her several nieces and nephews. She is preceded in death by her parents, sons Jim & Doug, husbands Darrell Metcalf and Jack Riddell, and siblings Elmer “Bud” Nimerfroh, Albert “Butch” Nimerfroh, Lorraine Pearson, and Addie Clark.