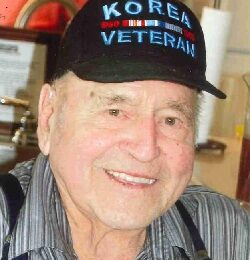 The family request masks be used during visitation and Mass.

The clergy will be Father Garrett Ahlers. Interment will be at the St. Joseph’s Catholic Cemetery in Lamberton, MN.

Elmer Henry Baune was born on August 1, 1928, in New Avon Township, Redwood County, the son of Lawrence and Bertha (Simon) Baune. He attended District 94 country school and entered the U.S. Army in March of 1951 and was honorably discharged in March of 1953. He was united in marriage to Donna Marie Hensch on June 23, 1953, at St. Thomas Catholic Church in Sanborn. The couple farmed, milked cows and raised 4 children. Elmer was a member of St. Joseph Catholic Church where he served as an usher, mowed the lawn and shoveled snow for many years. He was member of the American Legion for 69 years and a former Lions member. Elmer took great pride in being “Santa’s Helper”. He enjoyed visits to Jackpot, card club, coffee at the bakery and working on the farm with David Geis.