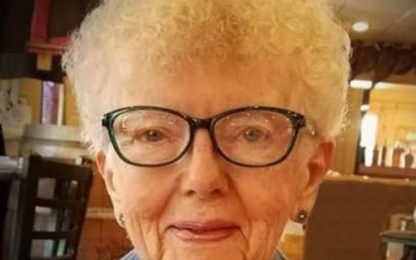 Elizabeth “Betty” Peterson was born May 9, 1930 to Raymond and Margaret (Harris) Lenhard in Litchfield, Minnesota.  She was baptized and confirmed at Trinity Episcopal Church in Litchfield.  Betty graduated from Litchfield Public High School in 1948.  On October 14, 1950, Betty married the love of her life Virgil Peterson in Litchfield.   The couple remained in Litchfield and raised their two sons on Lake Ripley.  Virgil worked at the NAPA store in Hutchinson and Betty worked some at the Independent Review, as her father was co-owner and publisher of that newspaper.  Betty also worked at Coast to Coast for Wally and Loretta Hansen.  In 1969, Betty and Virgil purchased the NAPA store in Redwood Falls.  While they were owners of NAPA, the couple traveled to many cities for NAPA national business conferences including: LA, Denver, Dallas, Toronto, and Hawaii.  In 1984 they retired and sold the business to their son Lowell and his wife.  This allowed Betty and Virgil to winter in Arizona.  Betty was a lifetime member of both the American Legion and VFW Auxiliaries.  She enjoyed helping at the First Presbyterian Piecemakers quilting group.  Their first grandchild Jacob was born in 1987, followed by Kirsten in 1988 and Anna in 1990.  Betty was an awesome grandma!  The grandkids learned many skills from her such as arts and crafts, some embroidery and baking, especially cookies and banana bread. Betty loved to embroider unknown amounts of dish towels for her loved ones.