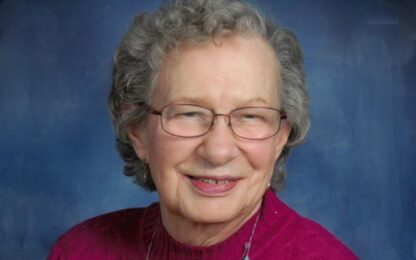 Elenore Schweinfurter, age 98 formerly of Redwood Falls, passed away October 27th, 2021 at the Boulder Creek Assisted Living facility, Marshall, Minnesota. Mass of Christian Burial will be held at 10:30 a.m. Tuesday, November 2, 2021 at St. Catherine Catholic Church in Redwood Falls. The service will be livestreamed on the Stephens Funeral Service Facebook Page. Visitation will be held 5:00-7:00 p.m. Monday at the Redwood Valley Funeral Home and will continue one hour prior to the service at church on Tuesday. Burial is in Beaver Falls Cemetery. Online condolences may be sent at www.stephensfuneralservice.com. Stephens Funeral Service – Redwood Valley Funeral Home is assisting the family with arrangements.

Margie Elenore Sanger was born to Nick F. and Mary (Mayme) Toussaint Sanger on August 7, 1923 on their farm in Norfolk Township, Renville County, Minnesota. She was the middle child of six who grew up in the country during the Great Depression and the Dust Bowl and would often recall walking in the fine, soft topsoil that had accumulated along the fence rows. She also had fond memories of time spent in Morton where her grandpa Pete (Toussaint) lived. Her teen years were spent in Lamberton, Minnesota after her family purchased the bakery there. She graduated from Lamberton High School in 1941. In her teens Elenore helped at Charlie’s Place, the store and bar her sister and brother-in-law ran in Bechyn, Minnesota. This is where she caught the eye of her future husband, Joe (Joseph M.) Schweinfurter. They married on January 14, 1942, driving to California for a 6-week honeymoon. Afterwards, they settled on a farm near Joe’s mother and brother in Beaver Falls Township, Renville County, which she called home for over 65 years. Joe and Elenore had eight children, spread out far enough to feel, at times, like three different sets! Her greatest heartbreak was the deaths of her three sons in accidents. Over the years she cherished time spent with her children, grandchildren, great-grandchildren and great-great-grandchildren. Elenore’s love of nature was lifelong.  When going to school meant walking a drainage ditch that was filled with fascinating bugs, frogs and birds. In her golden years she yearned to hear again the call of the Meadowlarks, long gone from Renville County. She would also watch for the annual migration of the monarch butterflies every August. She documented the lives of her family and life on the farm as an avid photographer and by journaling snippets in her calendars. Elenore was involved for many years in the St. Teresa’s Mission Club and served several terms as president. She developed a following for her famous Aunt Sally molasses cookies made especially for the St. Catherine’s Catholic Church’s annual Fall Festival for over thirty years. She passed on baking, canning and sewing traditions and was also well-known for her zucchini and rhubarb desserts, pepper jelly and sugared popcorn.

Elenore brought much joy to others with her great hugs, gentle spirit and quick wit!