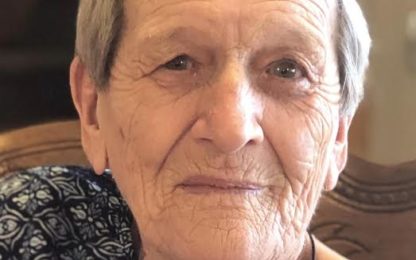 Elaine Clouse, age 90, of Olivia died at the Olivia Rehabilitation and Healthcare Center on Sunday, March 8. Mass of Christian Burial is Saturday, March 14th at 10:00 a.m. at St. Aloysius Catholic Church in Olivia with Rev. Joe Steinbeisser as celebrant. Burial will follow in the church cemetery.  Visitation will be Friday from 5-7 p.m. at Dirks-Blem Funeral Home in Olivia and continue Saturday at the church for one hour prior to the funeral.

Elaine Marie Clouse was born May 5, 1929 in Olivia, MN, to Louis and Anna (Wallenta) Toupal.  She grew up on a farm at Svea and graduated from Willmar High School. She then worked as a bookkeeper for Land O’ Lakes Creamery in Svea. Elaine married Robert Clouse on September 11, 1954 at St. Aloysius Catholic Church in Olivia. They were parents of eight children and Elaine was blessed to still be residing in the home the family has lived in since 1958. Besides being a homemaker she had worked for Trojan Seeds and also at the Olivia Liquor Store for over 30 years. Elaine enjoyed listening and dancing to polka music, gardening, raising flowers, and following the Minnesota Twins and Timberwolves. She was known for her famous chocolate cake, award winning rhubarb pie, caramels, pickles and many other delicacies. Most importantly she was known for sharing her treats with many in the community throughout the years and was also loved by so many who affectionately called her “ma”. Elaine was a member of the VFW Auxiliary and St. Aloysius CCW where she did lots of cooking and baking for festivals over the years.

Elaine is survived by her children: Mike Clouse of Olivia, Tom Clouse of Redwood Falls, Doug (and Leanne) Clouse of Cottage Grove, Laurie (and Casey) McLaughlin of Waterloo, IA, Greg (and Joan) Clouse of Olivia, and Tracy (and Mike) Wedl of Minneapolis; her 16 grandchildren and 6 great-grandchildren. Elaine was preceded in death by her parents; her husband, Robert; her two sons: Gary Clouse and Teddy Clouse; and her three brothers: Donald Toupal, Louis Toupal Jr., and Jimmy Toupal.