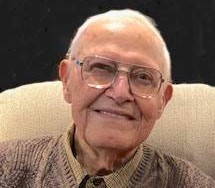 The clergy will be Pastor Tim Mason. Interment will be at the Sundown Lutheran Cemetery.

Jim Nelsen was born in April 1924 in Sundown Township to Einer and Ann (Thorston) Nelsen. At age 17 he joined the Navy where he spent the majority of his service in the Pacific Theater during World War II. After the war he returned to Minnesota where he worked briefly at the Ford plant in St. Paul before returning to the family farm near Clements. Jim married Phyllis Krueger on February 14, 1948. They farmed until they retired in 1986, when they moved to Springfield, Minnesota.

Through the years Jim was active in Sundown Lutheran Church and served on the church council. He served on the board and at one time was president of the North Star Cemetery Board. He was also active in the Clements Legion Post and loved playing cards with the senior group in Springfield. Upon his retirement he took up golf and he and Phyllis traveled extensively around the U.S. – even going as far north as Barrow, Alaska, on the shores of the Arctic Ocean!

Jim lived a very full life with lots of friends and time spent with family. He and Phyllis spent many happy hours fishing, and they also spent a week each summer with as many family members who could make it to Cragun’s on Gull Lake in the Brainerd area. There they enjoyed many happy times together. Jim was a wonderful husband and father and was dearly loved by his family.

The family has designated memorials to the Sundown Cemetery Association and St John Circle of Care in Springfield.