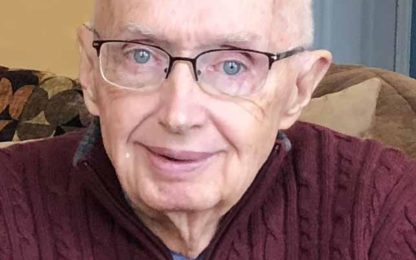 Visitation will be on Monday from 4 to 8 pm at the Sturm Funeral Home, Sleepy Eye and will continue on Tuesday from 9:30 am until 10:30 am at the church.

Service will be held at the Trinity Lutheran Church, Sleepy Eye, on Tuesday, January 21, at 10:30 am.

Interment will be at the La Salle Cemetery in La Salle, MN following the luncheon.

On line condolences may be left for the family at www.sturmfh.com

Edward Merle Blackstad was born on August 6, 1942 in Madelia, MN to Peter & Nellie (Sifford) Blackstad. He graduated from St. James High School. Ed met Catherine Olson in the 8th grade. They were high school sweethearts. They married on September 16, 1962 in Butternut, MN. Ed continued his education at Mankato State where he received his Bachelor’s degree and Ohio State where he received his Master’s degree. Ed started working at the Sleepy Eye High School in 1968 as a physics teacher. He taught over 3,000 students in his career. He retired from teaching in 1999 and then worked part time as the technology expert until 2006. Ed had many hobbies. He was a member of the Lion’s Club and Amateur Radio Club with W0KG being his call letters. Throughout his life his hobbies included knife making, bread making, reloading, gunsmithing, photography, wine making, bee keeping and sailing. He enjoyed camping with his family. He loved learning. He was a member of Trinity Lutheran Church.