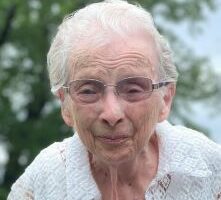 Edith Prodoehl, age 97, of rural Renville, passed away peacefully Tuesday, December 20, 2022 at her home surrounded by family. Funeral services are Wednesday, December 28, 2022 at 11:00 a.m. at Middle Creek United Methodist Church at rural Renville with Rev. Krey Leesman officiating.  Burial will be in the church cemetery.  Visitation is Tuesday, December 27, 2022 from 4 to 6 p.m. at Dirks-Blem Funeral Home in Olivia and continues for one hour prior to the service at the church on Wednesday. Memorials include Middle Creek Zion Cemetery, Renville County Hospice, and Redwood Falls Camp of the Gideons.

Edith Marie Prodoehl was born December 14, 1925 in Wabasso, MN to Robert and Virginia (Varco) Simning. Edith entered the foster system at the age of 12 after her father passed away. She worked in various homes providing child care for families. Edith was united in marriage to Alver Prodoehl on December 3, 1943 at Middle Creek Evangelical United Brethern Church. They made their home on his family farm in rural Renville. Edith believed that her purpose was to support her husband as a farmer’s wife as they raised cattle, chickens, and crops. She kept a large vegetable and flower garden which she canned the produce from to feed their family. They had a self-sustaining farm that they kept operating until they retired in the early 1990’s. Alver and Edith enjoyed traveling together; they took trips to Egypt, Israel, and Athens, Greece as well as many bus trips to various areas of the U.S. They also shared a love of spreading God’s word as Gideons. Edith was a faithful member of her church where she served on various boards and committees and taught Sunday school. She enjoyed playing dominoes, collecting dolls, and fishing with her family. Her love for her family was immeasurable and being a grandma enriched her life. Edith was a caring woman that kept her family on schedule and on their toes with her witty comments. She served others by giving and sharing what she had. In her later years she was blessed so she supported organizations and charities especially those that supported children. Edith will be remembered for being hard-working with a strong faith and love for her Lord.