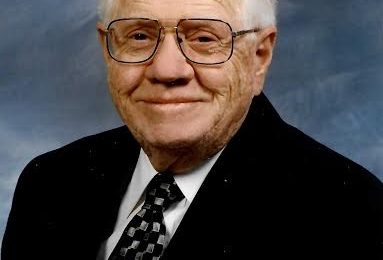 Duane W. Loe, age 90, of Willmar, formerly of Sacred Heart and Spicer, died Tuesday, December 31, at Copperleaf Assisted Living Center where he has lived for the last two years.  Funeral services will be 10:30 a.m. on Friday, January 10, at Faith Lutheran Church in Spicer.  Visitation will be 5-7 p.m. on Thursday at the Sacred Heart Community Center, Sacred Heart.  Visitation will continue on Friday one hour prior to the services at the church in Spicer.  Burial with military honors will follow the services on Friday at Our Savior’s Cemetery in Sacred Heart.  Arrangements are with Dirks-Blem Funeral Service, Renville, MN.

Duane was born March 25, 1929, in Montevideo, MN to Olaf and Anna (Haugland) Loe.  He was baptized and confirmed in Wang Lutheran Church in rural Maynard, MN.  He grew up on a farm near Maynard and graduated from Maynard High School.  After graduation he went to work at Security Bank of Maynard from 1948 to 1950.  He entered the US Army in 1950 and served for two years during the Korean War.  After his discharge from service, he returned home and farmed for one year.  He married Anitra Kanten on July 15, 1950, in Milan, MN. In 1954, they moved to Sacred Heart, MN where Duane began his 56 year employment at Farmers and Merchants State Bank.  He started as a bookkeeper and worked his way up to be bank president and board member.   While there, he also served as treasurer of the Sacred Heart Building Corporation, served 14 years on the Sacred Heart School board, served many terms on the Our Saviors Lutheran Church council, was a member of the SH American Legion and SH Village Chest treasurer.  In 1994, Duane and Anitra moved to Spicer MN on Green Lake.  He was a member of Faith Lutheran Church and served on the building committee when their new church was built.