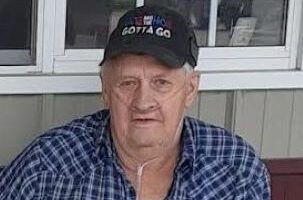 On November 10, 2022, Douglas Gene Pape, loving husband, father and grandfather, passed away after a courageous battle with cancer and other illnesses. Visitation for Doug will be Tuesday, November 15, 2022, from 1-3 p.m. in the Dirks-Blem Funeral Home in Renville.  A Celebration of Life will be held from 4-7 p.m. at the home of Aaron and Joleen Pape, 84494 – 150th St. Sacred Heart.

Douglas Gene Pape was born on December 20, 1949 to Marvin “Muffy” Pape and Ruth (Rice) Pape. He was baptized and confirmed at First Lutheran Church in Renville. He grew up in the rural Renville area and graduated from Renville High School in 1967. After high school he was employed in the area and served in the National Guard. Doug married the love of his life Mary (Kvistero) Pape in 1976.  Side by side, they worked hard and raised their family.

Over the years, Doug farmed and worked in the construction field.  He truly enjoyed farming and even after retiring, continued to help his son with his farming operations.  It is only appropriate then, that while out working in the field, Doug shared that he had made his peace with God.

Doug and Mary raised many cattle, hogs, horses, chickens and even some goats on the family farm outside of Sacred Heart. Many have enjoyed visiting the farm and petting and feeding the animals.  Even when he was ill, Doug continued to help with daily chores.

Besides farming, Doug found even greater joy in spending time with his family. His tremendous love for his grandchildren was apparent – he loved teasing them, and they loved teasing back. Doug had a great laugh and loved telling and sharing stories with family and friends. Near the end of his life, Doug’s health issues increased — he was so grateful to have a daughter who was a wonderful nurse and other family members assisting in his care.

He was preceded in death by his parents, his father-in-law Melvin Kvistero, his mother-in-law Alma Kvistero and his son-in-law James Poor Thunder.