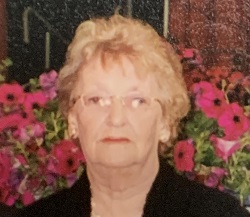 Dorothy Doose Schrupp was born on October 14, 1925, near Wood Lake to Ernest and Gena (Erickson) Doose.  She was baptized and confirmed at St. John’s Lutheran Church in Wood Lake.  She also graduated from Wood Lake High School.  On April 13, 1947, Dorothy was united in marriage to Vernon Schrupp at St. John’s Lutheran Church.  To this union were born sons Stanley and James.  Following their marriage, they farmed for 13 years before moving to St. Paul in 1960.  Dorothy worked for Twin City Testing Company for 26 years as a bookkeeper before retiring in June of 1988.  In April, 1991, Dorothy and Vernon returned to Wood Lake where she continued to care for Vernon until his death on October 6, 1995.  She enjoyed doing crafts, crocheting, working at Kotek Trucking and time spent with family and friends.  Dorothy was an active member of St. Stephanus Lutheran Church in St. Paul for 30 years and was currently a member of St. John’s Lutheran Church in Wood Lake.

Dorothy died on Wednesday, March 2, 2022, at the Parkview Nursing Home in Belview.  She is survived by her two sons Stanley (and Nelda) of Lakota, ND, and James (and Kathy) of Cottonwood, four grandchildren, nine great-grandchildren, four great-great grandchildren, sister-in-law Patricia Doose and other in-laws, nieces, nephews, relatives and friends.  She was preceded in death by her husband, Vern, parents, brother Donovan and step-mother Emma Doose, and one granddaughter.