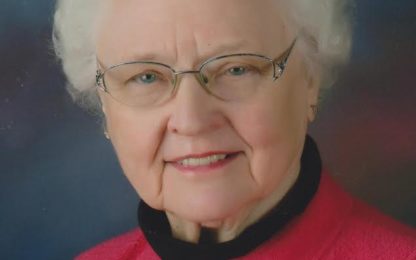 Dorothy Heaton, age 94, of Redwood Falls, passed away on Sunday, January 26, at Garnette Gardens in Redwood Falls. Arrangements are pending with Nelson-Hillestad Funeral and Cremation Services of Redwood Falls. E-mail condolences may be sent via www.nelson-hillestad.com.

Dorothy was born to John and Hazel (Short) Cooper on May 14, 1925 in New London, Iowa. She graduated from New London High School in 1943 where she enjoyed spending time with her friends and singing in the choir. After high school she worked in the office of Sheaffer Pen Company in Mt. Pleasant.  On April 11, 1948 she married Austin Heaton, a WWII veteran and graduate of Iowa Wesleyan College who worked for Production Credit Association. Together they had two sons; Alan in 1950 and Steven in 1953. In 1961 the family moved to Maynard, Iowa, where Austin worked as a sales manager for an ag supply company.  For a few years there she worked as a secretary for the principal of the West Central Schools. In 1966 the family moved again, settling in Redwood Falls, Minnesota where Austin worked in agricultural sales for Land O’ Lakes until his retirement. Dorothy was an active volunteer in the hospital auxiliary for many years and at the local senior center where she liked to show travel videos and help in the kitchen serving meals.  She has been honored as the Redwood County Senior Citizen of the Year.

Dorothy enjoyed conversations and time spent with friends and family. She always maintained a flower garden with iris, peony and gladioli being favorites.  Dorothy also had a fondness of feeding the birds that would stop by to grace her with a song.

She is survived by her sons, Alan (Kris) of Shoreview, Minnesota, and Steven (Dawn) of Spencer, Iowa, five grandchildren, 5 great-grandchildren and special friend Russ Swigart.

She was preceded in death by her parents, husband Austin, sister Geneva, brothers Virgil and John and special friend Jerry Schjaastad.