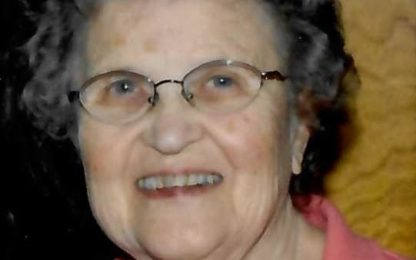 Doris Lorraine Heinemann, age 88, of Danube, died Friday, February 28, at Ridgeview Hospital in Waconia.  Funeral services will be 11:00 a.m. Tuesday, March 3rd, at St. Matthew’s Lutheran Church in Danube.  The Rev. Michael Kuschel will officiate.  Burial will be in the church south cemetery.  Visitation will be Monday from 5-7 p.m. at the Dirks-Blem Funeral Home in Renville.  Visitation will continue on Tuesday one hour prior to the services at the church in Danube.

Doris Lorraine Heinemann was born on April 15, 1931, in Franklin, Minnesota to Obert and Esther (Benson) Sather.  She was baptized, confirmed, and attended Central Lutheran Church in Fairfax. She grew up on a farm near Franklin where she attended country school.  She later attended Franklin High School, graduating in 1949.  She furthered her education and graduated from Mankato Business School.  Doris was united in marriage to Grant Heinemann on June 22, 1952, they were married for 49 years, when Grant passed away in 2001.  They lived on the dairy farm north of Danube, and Doris worked at the Danube Bank for 15 years. She also helped on the farm doing field work, milking cows, and helping with the chores.  She was a longtime member at St. Matthew’s Evangelical Lutheran Church in Danube.  Doris enjoyed spending time over the years as a 4-H leader, enjoyed sewing, was a great cook, and had a love of animals, especially dogs.  She also enjoyed watching the Vikings and the Twins.  She had a severe stroke in February of 2015, and has spent the last 5 years at Glen Fields Nursing Home in Glencoe.

Doris is survived by her children: Michael Heinemann of Danube, and Susan Heinemann of Chanhassen; her brothers and sisters: Ellsworth (and Patricia) Sather of Franklin, David (and Sylvia) Sather of Franklin, Janet Massen of St. Louis Park, and Ruth Sorenson of Hickory, NC; several nieces, nephews, and other relatives and friends.  She was preceded in death by her parents, her husband Grant, her daughter Janice, and her sister Sylvia Anderson.