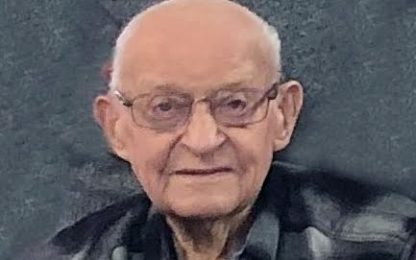 Donald Melin, age 99, of Olivia, MN died on Friday, May 14, 2021 at RenVilla Nursing Home in Renville. Funeral services will be on Friday, May 21, 2021 at 2 p.m. at United Lutheran Church in Lake Lillian with Pastor Matt Hausken as officiant. Burial will be at the Christina Cemetery.  Visitation will be for one hour prior to the service.  In lieu of flowers memorials are preferred. Arrangements are with Dirks-Blem Funeral Service of Olivia.

A livestream of the service will be available to view on Friday, May 21st at 2 p.m. by clicking on the following link.  https://my.gather.app/remember/donald-melin

Donald Luvern Melin was born on November 29, 1921 on the family farm north of Bird Island to Richard and Esther (Anderson) Melin. He attended country school just down the road from the family farm.  Donald worked on the family farm until being drafted into WWII and returned after serving in Europe.  He served his country in the U.S. Army from 1942 to 1945 and received a purple heart medal. Donald married Margaret on June 17, 1949 at St. Mary’s Catholic Church in Bird Island. They lived and farmed north of Bird Island and were blessed with two children. He enjoyed going on bus trips and traveling to the North Shore, gardening, visiting, playing checkers and monopoly. He had a love for growing pumpkins and different kinds of squash for his grandkids. In the fall he would make a trip or two with a pickup and trailer to the Roske boy’s house in Minnetonka. He did the same for granddaughter, Madison Melin who sold the pumpkins near the family farm. When friends and neighbors dropped by for a visit, Donald always had time to invite them in for a cup of coffee. More than likely Margaret had one of her special treats to share to make the visit even better.  He was a member of United Lutheran Church and a former member of the Lake Lillian Elevator.  Farming was Donald’s passion as he was proud to be a lifelong farmer even helping his son farm until he was 93.

Donald is survived by his daughter Sue (and Tom) Roske of Minnetonka; his son Gary (and Pauline) Melin of Olivia; his four grandchildren: Jacob Roske (and Bianca Pettis), Jordan Roske (and Erin Rooney), Patrick Roske, and Madison Melin; his great-grandchildren: Edee Wren Roske Rooney and Wilder Fox Roske Rooney. Donald was preceded in death by his wife, Margaret; his parents and his two sisters: Florence Peterson and Violet Coil.