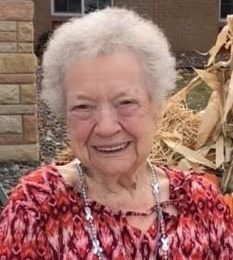 Deloryia “Lorie” Blankenhagen, age 88, of Renville, died on Sunday, April 12, at RenVilla Nursing Home in Renville. A memorial service will be held at a later date with interment at Fort Snelling National Cemetery. Arrangements are with Dirks-Blem Funeral Service of Renville.

Deloryia June Blankenhagen was born on June 3, 1931 to Fred and Grace (McFarland) Hult in Johnsonville Township near Milroy, MN. She was baptized and confirmed in Milroy. On May 27, 1949, Deloryia graduated from Milroy High School. Lorie was united in marriage to Darvin “Doc” Blankenhagen on June 26, 1949. They were blessed with six children. After living in various places, they made their home in Renville. She worked at Control Data in Redwood Falls for many years and then worked for Southern Minnesota Beet Sugar Coop as Miscellaneous Lead until retiring in 1996. While she was working she was a member of the union, local 369G. Lorie was a full time grandma after retiring. She was a member of First Lutheran Church in Renville, the Legion Auxiliary, DAV Auxiliary, and the blood mobile. Lorie enjoyed playing cards, bingo, going to the casino, and campfires. She loved coloring and drawing. Throughout the years she collected many coins and teddy bears. Lorie had an immeasurable love for her family. She was always willing to help her loved ones. She made numerous batches of homemade noodles for when her family was all together. Lorie will be remembered for her unforgettable smile and fun loving personality.