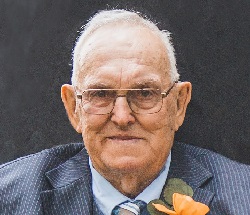 David Roger Lueck, age 87 of rural Renville, passed away Wednesday, January 18, 2022 at Cushman Cottage in Willmar. Memorial Services will be held March 16, 2022 at Middle Creek United Methodist Church, rural Redwood Falls. Full service details will be published at a later date. Interment will be in the Middle Creek Zion Cemetery. Online condolences may be sent at www.stephensfuneralservice.com. Stephens Funeral Service – Redwood Valley Funeral Home is assisting the family with arrangements.

David Roger Lueck was born March 16, 1934 on what his mother described as a pleasant spring day, in Middle Creek, Flora Township, Minnesota. He was the youngest of nine children of Edward Lueck, and the first child with Edward’s second wife, Elsie (Matzke). His older brothers played with him a lot and had him walking at an early age. When David was seven years old his family and he moved a short distance away to a farmstead in Flora Township where he lived the remainder of his life. His parents and he kept large flower and vegetable gardens. He would sometimes go on overnight stays with his older siblings and cousins that were near David’s age. David graduated from Danube High School in 1952. He served in the Minnesota National Guard. He farmed his whole life. He enjoyed working with livestock, and raised champion 4-H cattle when he was young. The farming tradition has continued, with David’s son, Bruce, continuing to farm the family farm. One of the great challenges was a tornado that went through the farmstead in 1992. David married Joyce (Gaffney) in Redwood Falls in 1960. They had three sons, Dwight (born 1961), Blaine (1963) and Bruce (1965). David enjoyed bowling, and was active in league bowling until 2006. He was a member of the board of Renville-Sibley Co-Op Power for over 25 years, and enjoyed trips taken with fellow board members. He was a lifelong member of the Middle Creek United Methodist Church and served as its treasurer for over 20 years. He sang many solos over the years at Middle Creek and other churches, and participated in several church choirs. He also enjoyed family reunions and family vacations.