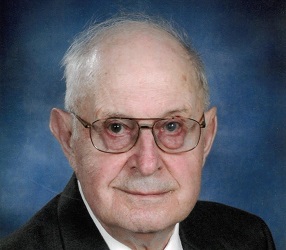 Darrold Walling, age 94 of Lucan, passed away Sunday, February 6, 2022 at Sanford Hospital in Tracy.  Visitation will be held from 5:00-7:00 p.m. Sunday, February 20, 2022 at Trinity Lutheran Church in Lucan with a prayer service at 7:00 p.m.  Memorial Services will be held at Our Savior’s Lutheran Church in Osage, IA at a later date.  Interment will be in the Orchard Cemetery in Orchard, IA at a later date. In lieu of flowers, memorials are preferred to Trinity Lutheran Church, the Lucan Lions or the Orchard Cemetery.  Online condolences may be sent at www.stephensfuneralservice.com.  Stephens Funeral Service – Tracy Area Funeral Home is assisting the family with arrangements.

Darrold Walling was born August 1, 1927 to Lawrence and Amy (Wetter) Walling in Osage, Iowa. He graduated from Orchard High School and was later united in marriage to Alpha Nack on April 5, 1953 in Grafton, IA. Alpha passed away in 1962. On June 13, 1965, Darrold married Marcella Schleuger in Osage, IA. The couple farmed near Osage on the family farm that has been in the family since 1855. In 1985, they moved to Lincoln, Nebraska, where Darrold worked for the telephone company. In 1993, Darrold and Marcella moved to Lucan, Minnesota to be closer to their son Lon and to help on the farm. There Darrold belonged to the Lucan Lions and he and Marcella became members of Trinity Lutheran Church. Darrold enjoyed playing in multiple dance and parade bands, including the Minnesota Over 60 Band, when they were inducted into the Minnesota Music Hall of Fame.