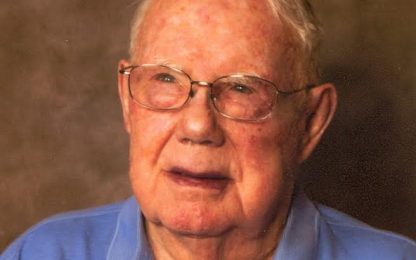 Curtis Wood passed away on Saturday, May 22, 2021 at the Bethesda Grand in Willmar, MN.  A Celebration of Life will be held on Wednesday, June 2nd at 11:00 a.m. at the Faith United Methodist Church in Olivia with Pastor Krey Leesman officiating. Visitation will be Wednesday at the church from 9:30-11:00 a.m.  Interment will be Wednesday 2:15 p.m. at the Ripley Cemetery, Litchfield, MN. Curt’s funeral will include a Masonic service and military rites.  Arrangements are with Dirks-Blem Funeral Service of Olivia.

Curtis David Wood was born on May 5, 1926 to Inga and Clayton Wood on a farm near Paynesville, MN.  Later, his family moved to Woodland, MN.

Curtis graduated from Mora High School. During WWII, Curtis enlisted in the U.S. Air Force.   Curtis moved to McGrath, MN after the family business and home at Woodland burned down about 3 weeks after he returned home from the service. He served on the town council and one term as Mayor while in McGrath. Curtis was married to his childhood sweetheart, Lillian Carpenter on Sept 25th, 1948, and were the parents of David, Zona, and Steven Wood. They celebrated 68 years of being married before Lil passed away in 2017.

Curtis was busy with his trucking business, Wood’s Transfer, where he and his crew delivered aggregated limestone to a large area in Northern MN.  During the winter months, Curtis and his crew hauled logs from the Gunflint Trail.  Curtis expanded his business to include selling Case Farm Machinery and the Feed Store for the farmers, bottle gas, the Ox Yoke Dance Hall and roller skating rink.  Hunters enjoyed many breakfasts in the hall before heading out to hunt.  Curtis was also the Mayor of McGrath, MN.

In August 1961, Curtis and Lil purchased the Nursing Home in Olivia, MN.  The home grew and changed for the better under their management. When they sold it in 1977, it had grown from 32 to 90 residents.   Curtis served on the local and State Nursing Home Association for 17 years.  During this time he was on the Board and held the position of Director of the Association.  Curtis and Lil built the Island Manor Assisted Living in Bird Island and were one of the four that built Tower Hill’s Senior Condo’s in Buffalo, MN.  Curt liked to keep busy so for fun he worked as a realtor in his retirement. For over 35 winters, Curt and Lil lived in Lake Havasu City, Arizona during their retirement.

Curtis was active in and served as the 1st president for the Olivia Lion’s Club.  He helped organize the first parade for the Olivia Corn Capital Days.  He was an active member of the Faith United Methodist Church in Olivia.  Curtis was a member of the Olivia Mason receiving a 50 years of membership.  Curt and Lil traveled with the Tucson Shriners and were members of the Elks Club.  Curtis enjoyed learning to fly and eventually owned his own plane.  He also enjoyed old cars, collecting clocks, playing golf, and traveling.  Curtis enjoyed coffee with friends and when losing the dice shaking he would purchase coffee for everyone.  He loved time with his family including 7 grandchildren, and 10 great grandchildren.