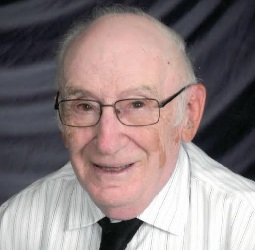 Clarence Rothmeier was born on February 7, 1930, in Three Lakes Township, Redwood County, to Henry and Theresa (Fink) Rothmeier.  He grew up on the family farm in Three Lakes Township and attended Sunrise School District 106.  Clarence was drafted and served in the U.S. Army from1952 – 1954.  On May 4, 1954, he was united in marriage to Doris Goblirsch at St. Anne’s Catholic Church.  The couple farmed and raised their family one mile east of Wabasso.  Clarence was very passionate about farming.  He also enjoyed bowling, golfing and his daily coffee and card games with his friends.  He was an active member of his community.  He served on the St. Anne’s Cemetery Board of Directors, the Wabasso Lions Club and the Wabasso American Legion.

Clarence died peacefully and suddenly at his residence in Wabasso on Wednesday, December 22, 2021.  He is survived by his wife, Doris, of Wabasso, children Jean (and Tom) Konrardy of Waconia, Dennis (and Karla) Rothmeier of Redwood Falls, Angela (and Dan) Gegner of Redwood Falls, Janet (and Terry) Weller of New York Mills, Brian (and Lisa) Rothmeier of Wabasso, 14 grandchildren, 19 great-grandchildren, brother Richard Rothmeier of Morgan, sister Caroline (and Ed) Mathiowetz of Sleepy Eye, nieces, nephews, relatives and friends.  He was preceded in death by his parents Henry and Theresa, sister Delores Bossuyt, brother-in-law Donald Bossuyt and sister-in-law Devota Rothmeier.