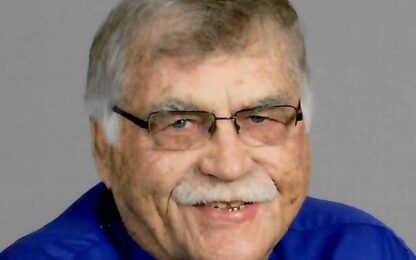 A patriot from birth, he was born on July 4, 1947, to Clarence and Lena (Strey) Molenaar. He graduated from Danube High School in 1965 and then served in the Army Reserve.  In 1973, he was united in marriage to Joanne Rodel of Bird Island. They made their home in Holland Township where he farmed, raising corn, soybeans, cattle, hogs, and sheep, in addition to custom baling.

In 1989, Chuck experienced kidney failure. Wes Johnson generously donated a kidney which allowed him to continue to farm and raise his children.  Chuck’s family is deeply grateful for this gift of life.

Chuck was a very active and involved member of the community he loved. He was a member of the American Legion, Danube School Board, Cattlemen’s Association, Pork Producers, and Holy Redeemer Church Council.

In his retirement years, he enjoyed restoring tractors, helping his son-in-law during the planting and harvest seasons, scrapping, and having coffee with his neighbors in the shop.

He was preceded in death by an infant son, his parents, and his brother Orville.

There will be a private Mass of Christian Burial for the immediate family. Interment to follow at Fairview Cemetery.  A Celebration of Life will be held at a later date for his friends and extended family. Arrangements are with Dirks-Blem Funeral Service, Renville, MN.