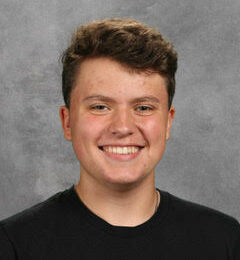 Carter Bremseth, age 16, of Olivia, MN died December 5, 2021 at his home. Mass of Christian Burial will be Saturday, December 11th, at 11:00 a.m. at St. Mary’s Catholic Church in Bird Island, MN with concelebrants Father Joe Steinbeisser and Father George Schmit. Burial will be in the St. Aloysius Cemetery in Olivia. A luncheon will follow the burial at St. Aloysius Catholic Church Jubilee Center in Olivia. Visitation will be on Friday, December 10th, from 3 to 6 p.m. at the BOLD High School Gymnasium in Olivia. Visitation will continue Saturday from 9:30 a.m. to 11 a.m. at St. Mary’s Catholic Church in Bird Island. Arrangements are by Dirks-Blem Funeral Service of Olivia.

A live stream of Carter’s service will be available starting at 11 a.m. on Saturday at the following link: https://my.gather.app/remember/carter-bremseth

Carter Daniel Bremseth was born on October 24, 2005 to Daniel and Jaime (Flohrs) Bremseth at the Fairview University Hospital in Minneapolis, MN. He was baptized at St. Aloysius Catholic Church in Olivia. Carter attended St. Mary’s Catholic School in Bird Island until 8th grade and then went to BOLD High School where he was currently a sophomore. He was the oldest of three children; he loved his brother and sister immensely but “didn’t always like them.” He loved his dog, Luna, and tolerated his cat, Trixie. Due to the medical conditions he had as a young child, Carter matured sooner than most his age. He was a responsible young man that was wise beyond his years. His intuition to know exactly what the people around him needed was a gift. To have Carter as your friend was to know what true friendship was. What most would call impatient was turned into motivation and being goal-driven by Carter. He knew what had to be done and whether he wanted to or not, he did it.

He enjoyed fishing, playing soccer, and watching football but his love for golf was immeasurable. The only thing on his mind after a day of golfing was when he would be able to get back on the course. Watching Pro-Golf and the “Good Good” channel on YouTube was what he did when he wasn’t golfing himself. “The Office” was one of his favorite TV series, he had re-watched it many times. Playing video games with his friends brought him much joy; he could often be heard yelling and laughing with his friends while playing. Being involved and helping people was important to him. He was an altar server for both St. Mary’s and St. Aloysius, did the lighting for the school musicals, and was part of the Robotics team. He worked at the 523 Trading Post at Dirks Furniture where he liked interacting with customers. He made his parents proud by being humble, gracious, and kind. He was soft-hearted with a gentle soul; his biggest worry was hurting people. He was an extrovert that loved people. Happiness radiated from him through his singing, loud clapping, special laugh, and positive outlook. Carter will be remembered for being full of life, humble, and too good for this world.

Carter will be forever loved and missed by his parents, Dan and Jaime of Olivia; his siblings, Carson and Camryn; his paternal grandparents, Bruce and Linda Bremseth of Olivia; his maternal grandparents, Larry Flohrs of Trimont and Yvonne Flohrs of Trimont; his great-grandmother, Joan Bremseth; his aunts and uncles: Becky Schmidtke (and special friend, Jason Becker), Cody Flohrs, Jacob (and Tiffany) Flohrs, Scott (and Katie) Bremseth, and Alan (Jessica) Bremseth; his cousins: Teya Schmidtke, Tristian Castillo, Serenity Bremseth, Berkley Bremseth, Brantley Bremseth, Axel Bremseth, Elise Bremseth, Owen Bremseth, and Isaac Bremseth; special “grandparents,” Alle and Doris Pohlen; his furry friends, Luna the dog and Trixie the cat; and many other relatives and friends. Carter was preceded in death by his great-grandparents: Carl and Opal Flohrs, Jim and Tootie Penner, Eldo Beckmann, Lawrence and Helen Tasto, and Everett Bremseth; and his second cousin, Brian Skold.