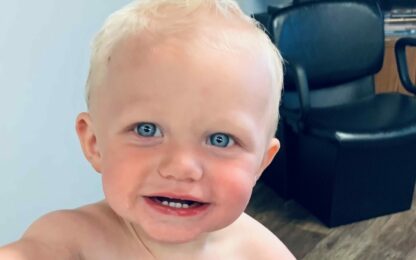 Braxton William Welch was born August 13, 2020 to his parents Samantha (Rachuy) and Jacob Welch in Wabasso, Minnesota. He was a little boy who had a huge life ahead of him. Braxton loved watching Paw Patrol, dancing, and giggling. He also enjoyed spending time outside with his family, four-wheeler rides being one of his favorite things to do. Braxton loved to chase his dog Grizzly around, along with all his chickens! His older brother, Harrison, was his best friend, as they would tease each other, laugh, and play together. He had a very contagious smile, with the biggest, brightest two blue eyes. At any time that someone had a camera out to take a picture, Braxton would stop what he was doing and say “Cheese!” He enjoyed baking cookies with Grandma Rachuy, where he got to be messier than messy. He had a great sense of humor, whether he was licking Grandma’s windows, taking Grandpa’s flashlights, or pushing the broom to help sweep the floors, he knew how to make everyone laugh. Grandma Tam always called Braxton, Harrison, and his cousins Camden and Dawson, the “Four Little Pigs!” The four of them were always getting into trouble at family suppers, but made wonderful memories during their time together. He favored his grandpas the most, as he was always wanting to do what they were doing. Braxton was so proud of himself that he was learning to count, as he had made it to the number eight! He was infamous for popping around the corner and checking in on what everyone was doing. Braxton was the best cuddler and loved to give hugs and kisses, which will forever be cherished greatly.

Braxton is survived by his parents, Samantha (Rachuy) and Jacob Welch; brother, Harrison; grandparents, Bill and Peggy Rachuy and Troy and Tam  Welch; many aunts and uncles, cousins, and friends.