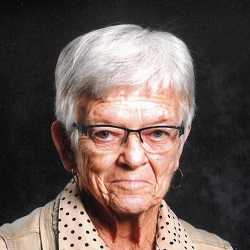 Beverly C. Van De Wiele, age 87 of Marshall, formerly of Tracy and Walnut Grove, passed away Monday, December 13, 2021 at Heritage Pointe Senior Living in Marshall. Mass of Christian Burial will be held at 10:30 a.m. on Saturday, December 18, 2021 at St. Mary’s Catholic Church in Tracy. Visitation will be held 4:00-7:00 p.m. on Friday, December 17 at the Tracy Area Funeral Home with a Rosary at 4:00 p.m.  Visitation will continue one hour prior to the service at church on Saturday. Interment is in St. Paul’s Calvary Catholic Cemetery in Walnut Grove. In lieu of flowers, memorials are preferred to Heritage Pointe Senior Living, Marshall Community Transit Bus, or the Michael J Fox Parkinson’s Foundation. Online condolences may be sent at www.stephensfuneralservice.com.  Stephens Funeral Service – Tracy Area Funeral Home is assisting the family with arrangements.

Beverly Catherine (Lavicky) Van De Wiele was born December 31, 1933 in Cottonwood County, Minnesota to Ted and Lil (Swenhaugen) Lavicky. She was baptized and confirmed at St. Mary’s Catholic Church in Tracy.  On August 20, 1952, Bev was united in marriage to Raymond Van De Wiele at St. Mary’s Catholic Church in Tracy. Together the couple lived on the home farm northeast of Walnut Grove in North Hero Township for 25 years until 1983 when they moved one mile to the west.  They lived there another 25 years before moving to Tracy in 2008.  Bev worked right alongside Ray on the farm. She loved to mow their large acreage, and loved gardening.  Bev was an excellent cook and she loved to bake.  Some of her favorite items to make and were enjoyed by many were chocolate chip cookies, potato salad and rice pudding, she always made extra. She was a member of the Walnut Grove Legion Auxiliary for many years. Bev and Ray experienced many travels together including Alaska, Mexico, and Florida.  They also spent four years wintering in Arizona.  Bev was very creative and very gifted with crafts.  To pass the time she enjoyed painting, ceramics, needle point, and sewing.  Bev loved spending time with her grandchildren and great-grandchildren.