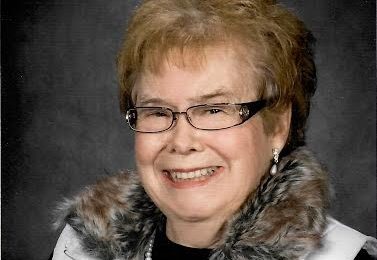 Beulah “Bee” Esther Eekhoff was born on February 5, 1930, on a farm in Yellow Medicine County to Reuel and Esther (Lund) Knudson. Bee was baptized at St. Petri Lutheran Church near Boyd and later confirmed at Saron Lutheran Church near Maynard, Minnesota.  She grew up on a farm near Montevideo and graduated from Montevideo High School in 1948.  Bee was united in marriage to Loyis Eekhoff on July 30, 1950, at Saron Lutheran Church.  After their marriage, they made their home in Renville and Bee worked as a bookkeeper for Varpness Implement; Fuller and Fischer Implement; and also at the family business, H & L Motors, all in Renville.  Bee was an active member of First Lutheran Church in Renville, where she taught Sunday school, was active in WELCA, sang in the church choir, and a member of the Stephen Ministries.  She was also very active in the Renville community, supporting the Civic Club and the Gideon’s for many years.  She loved being a wife, mother, and grandmother. She enjoyed spending time with her grandchildren and great- grandchildren.  She also enjoyed hardanger, quilting, cooking, and baking her homemade rolls and goodies.

Bee is survived by her husband Loyis, her sons and daughter: Larry (and Mary Mark) of Renville, Gary (and Victoria) of Renville, and Michelle (and Kevin) Mulder of Hutchinson; her nine grandchildren: Elias (and fiancée Diana Wu) Eekhoff, Daniel (and Megan) Eekhoff, Liza (and Brent) Fagen, Laura (and Andrew) Rosen, Katie (and Joseph) Manson, Kayla (and Robert) Jansen, Ryan (and Karissa) Mulder, Lisa (and Christopher) Damhof, and Jennifer (and Jared) Fairbanks; 16 great-grandchildren; her two brothers: Gunval (and JuliaAnn) Knudson of Granite Falls, and Stanley (and Carolyn) Knudson Montevideo; many nieces, nephews, and other relatives and friends.  She was preceded in death by her parents and her brother Raymond Knudson.