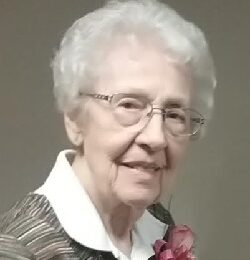 Betty LaJane (Benson) (Schrupp) Jeseritz was born on April 20, 1928, to Alfred and Edna (Marquardt) Benson, in Seaforth, MN. She was baptized in the Lutheran faith and later confirmed on May 3, 1942, in Vesta. Her confirmation verse was Psalm 143 verse 10. Betty was the oldest of fourteen children. She attended elementary school, and later in life Betty received her GED at Granite Falls Technical School, which she was very proud to receive, at the age of 64.

Betty married Franklin Schrupp on January 28, 1945. To this union was born five children: Delano, Sandra, John, Randy, and Harvey. Betty was a stay at home mother until the 1960s, when she went to work for Control Data, later Zytec, in Redwood Falls. She worked there approximately 25 years. Betty taught Sunday school for several years, and she was a member of the St. John’s Women’s Society. She was also a member of the Wood Lake Legion Auxiliary for approximately 63 years.

In October of 1995, Betty’s husband Franklin passed away. In September of 2005, Betty married Harlan Jeseritz. Harlan passed away in 2015, at which time Betty moved to Avera Granite Ridge Assisted Living. After that she lived at the Avera Granite Falls Care Center, where she passed away at the age of 93 on Monday, January 24, 2022. She is survived by her sons Delano (JoAnne) of Alexandria, John (Beverly) of Marshall, Randy (Robin) of Pierre, SD, and Harvey of State Center, IA; nine grandchildren and 26 great-grandchildren; five brothers and two sisters. She was preceded in death by her parents Alfred and Edna Benson, husbands Franklin Schrupp and Harvey Jeseritz, daughter Sandra Schrupp, two infant grandchildren, brothers Norman, Dallas, and Gary, sister Beulah, and two infant siblings.