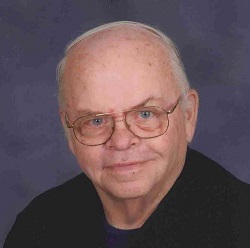 Service will be held at the St. Thomas Oratory on Friday at 1:00 pm.

The clergy will be Father Garrett Ahlers. Interment will be at the Home Cemetery in Sleepy Eye, MN.

Arrangements are with the Sturm Funeral Home in Springfield, MN.  Online condolences may be left for the family at www.sturmfh.com.

Beach W. Roberts was born on October 8, 1935 to William and Isabelle (McKenzie) Roberts in Sleepy Eye, MN. He grew up in Sleepy Eye and graduated from Sleepy Eye Public High School in 1954. From 1959-1961 he served in the U.S. Army.  Beach was united in marriage to Pauline Reinarts on January 8, 1966. After his years in the Army, he worked a variety of jobs in the Sleepy Eye area before moving to Sanborn where he was employed by Central Publications. He worked for 23 years as a Press Operator and Manager before retiring.Beach enjoyed spending time at his family cabin in Park Rapids, fishing, playing cribbage and solitaire, as well as woodworking in his garage. His sense of humor and one liners were infectious. He always made it a point to help others and ensured people looked at the positive side of life.